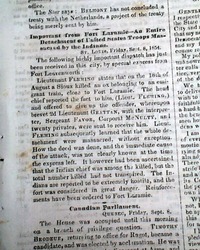 The front page has an article headed: "Important from Fort Laramie--An Entire Detachment of United States Troops Massacred by the Indians" Early, 1st report coverage on what was known as the "Grattan Massacre". This was the opening engagement of the... See More 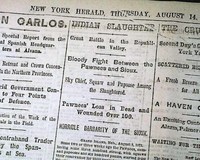 The top of page 5 has a column with heads: "INDIAN SLAUGHTER" "Great Battle in the Republican Valley" "Bloody Fight Between the Pawnees and Sioux" "Sky Chief, Squaw and Papoose Among the Slaughtered" "Pawnees' Loss in Dead and Wounded Over 100" &quo... See More 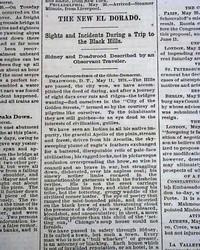 The ftpg. has column heads: "HE NEW EL DORADO" "Sights & Incidents During a Trip to the Black Hills" "Sidney and Deadwood Described by an Observant Traveler". A very descriptive article on Deadwood and Sidney, the latter being in Nebraska. Sidney is described in part... See More 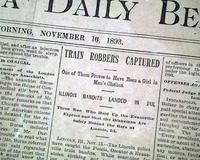 The train robbers were captured... One is a woman...


THE OMAHA DAILY BEE, Nebraska, Nov. 16, 1893  The top of the front page has a nice account headed: "TRAIN ROBBERS CAPTURED" "One of Them Proves to Have Been a Girl in Men's Clothes" "Illinois Bandits Landed In Jail" "Three Men Who Held Up the Evansville Express & Shot the Brakeman Are Safely Behind Bars at Lincoln, Ill." The articles takes three... See More 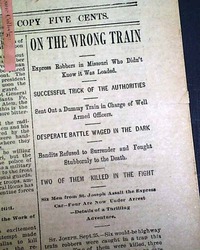 Great train robbery report, but it was the wrong one...


THE OMAHA DAILY BEE, Nebraska, Sept. 26, 1893  The ftpg. has a nice, full column report on a train robbery headed at the top: "ON THE WRONG TRAIN" "Express Robbers in Missouri Who Didn't Know It Was Loaded" "Successful Trick of the Authorities" "Sent Out a Dummy Train in Charge of Well Armed Officers" "Desperate Battle Waged in the Dark" &... See More 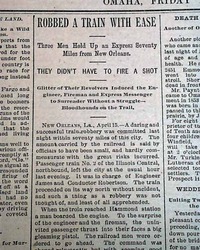 Train robbers have an easy job of it...


THE OMAHA DAILY BEE, Nebraska, April 15, 1892  The top of the front page has an interesting article headed: "ROBBED A TRAIN WITH EASE" "Three Men Hold Up an Express Seventy Miles from New Orleans" "They Didn't Have to Fire A Shot" "Glitter of Their Revolvers Induced the Engineer, Fireman and Express Messenger to Surrender Without a Struggle--Bloodhounds ... See More 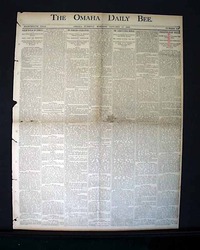 
THE OMAHA DAILY BEE, Omaha, Nebraska, 1889 This is a typical daily newspaper from this famous cow-town from the Old West.

Some browning and irregular at the spine. Bit of pulpishness. Should be handled with care.