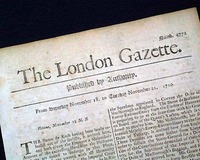 From the oldest continuously published English language newspaper in the world...

Item #120034
THE LONDON GAZETTE, England, 1708 - 1711  We will select a nice, genuine issue from this early period of the 18th century.
This is the oldest continually published English language newspaper in the world, having begun in 1665 and is still publishing today. This newspaper has various news of the day, mostly European, but several advertisements as well. Nice condition. 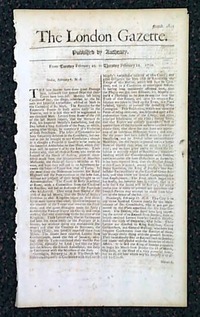 Item #120116
THE LONDON GAZETTE, England, 1710-1712  A very early singlesheet newspaper from the early 18th century. This is the oldest continually published newspaper in the world, having started in 1665 and is still printing today.
Small folio size and in nice condition.  The photo shown is representative of the issue you will receive, but actual issues vary - but will be dated between 1710-1712 (... See More 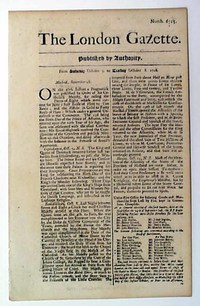 Item #120436
THE LONDON GAZETTE, England, dates ranging from 1726 to 1730. This is the oldest continually published newspaper in the world, having begun in 1665 and is still being published today. Reporting is almost entirely concerned with Parliamentary items and European news with some advertisements near the back of the issue.
The photo below is "generic" however the issue you will receive, datin... See More 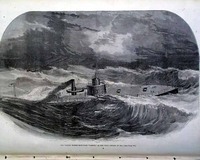 Views of the Fredericksburg vicinity...


HARPER'S WEEKLY, New York, December 6, 1862  The full front page is taken up with a nice print of: "Major-General Nathaniel P. Banks, United States Army". Other prints inside include: 'The United States Iron-Clad 'Passaic' as She Will Appear at Sea" "Interior of the Turret of the 'Passaic'" "Aquia Creek, on the Potomac, New Base of Supplie... See More 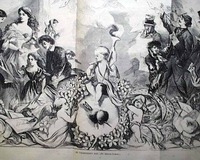 
HARPER'S WEEKLY, New York, Feb. 17, 1866  The entire front page has two prints: "Central City, Colorado" which is a town view; and "A Gambling Scene in Denver City, Colorado". Inside is a large print of "George Bancroft"; a full page of the: "Grand Reception Given by the 7th Regiment at the Academy of Music, New York"; a print of: "The Late Rev... See More 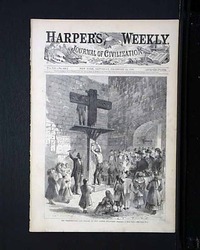 
HARPER'S WEEKLY, New York, December 12, 1868  The frontpage of this issue is of 'The Whipping Post and Pillory at New Castle, Delaware'.  An article "H. Rives Pollard" also features an illustration of him.  A nearly 1/2 page illustration entitled "Scene of the Philadelphia tragedy, Corner of Tenth and Pine Streets"  A halfpage 'Alaska--Interi... See More 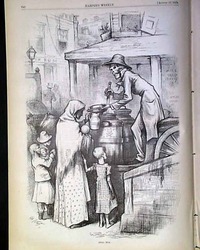 
HARPER'S WEEKLY, New York, August 17, 1878  Full ftpg: 'The Battle of Birch Creek' shows much action. Nice fullpg. Nast: 'Swill Milk' is famous. Nice dblpgctrfld: 'C-O-L-U-M-B-I-A!' shows 3 scenes of the college other illustrations as well. Dblpage. has 8 'Sketches In Palestine' in the Supplement.
Other news and advertisements of the day are included. This... See More 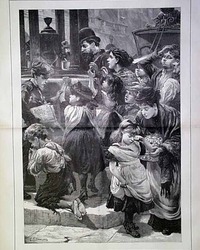 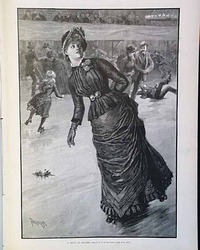 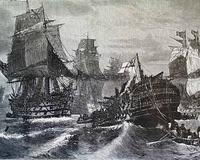 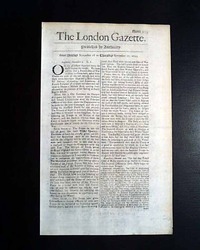 
THE LONDON GAZETTE, 1690-1698  An opportunity for a genuine issue of the world's oldest continually published English language newspaper, having begun in 1665 & is still publishing today. This issue is well over 300 years old.
Very nice condition with some minor foxing, single sheet,  printed on both sides. A very popular title & a foundation for any newspaper collecti... See More

Add to Cart
If you are searching for a newspaper from a specific date, please note that we have a vast selection available for purchase by using the date picker on our gifts and birthday newspapers page.
← Previous 1 2 3 4 5 Next →
[ RSS Feed ]
eBay items updated by Auction Nudge