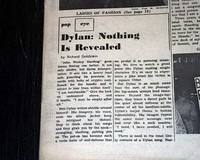 
THE VILLAGE VOICE, New York, Feb. 1, 1968  Beginning on the front page is a review of Bob Dylan's recently released album "John Wesley Harding", the article titled: "Dylan: Nothing Is Revealed".
The author Richard Goldstein takes a very extensive look at the music of Dylan with the review, and in particular the works in this new album, carrying over to take most of a ... See More 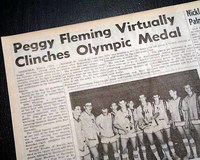 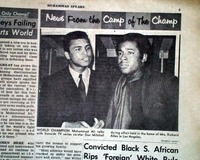 
MUHAMMAD SPEAKS, Chicago, Illinois, February 23, 1968 This newspaper was one of the most widely-read ever produced by an African American organization. Nation of Islam leader Elijah Muhammad began the publication on May 1960 as a weekly publication. It was distributed nationwide by the Nation Of Islam and covered current events around the world as well as relevant news in African American communit... See More