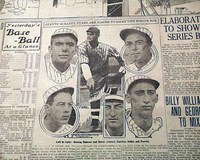 Page 11 has a three column pictorial with heading: "Giants' Scrappy Stars Are Eager To Meet The White Sox" which shows six New York Giants players that are about to play in the 1917 World Series. Text as well. Surprisi... See More 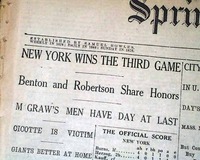 This 18 page newspaper has two column headlines on the front page that include: "NEW YORK WINS THE THIRD GAME", "Benton and Robertson Share Honors" and more with the subheads, photo and box scores... See More 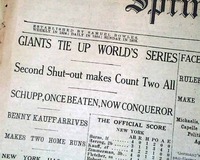 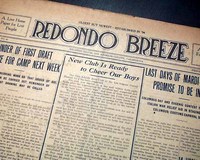 An early newspaper from one of the more famous beach communities in Los Angeles County. The popular television series "Baywatch" was filmed in Redondo Beach. Only one institution has any notable holdings of this newspaper.
A combination of local & national news, offering... See More 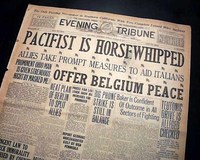 The front page has a nice banner headline: "PACIFIST IS HORSEWHIPPED" with subhead. (see) Nice for display. A little residue from the removed address label slightly affects the headline. (see) Surprisingly this issue is in good condition being from the &q... See More