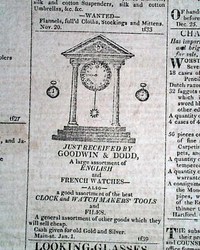 The front page begins a letter from then Secretary of State James Monroe, continued on page two and signed in block type: JAMES MONROE.  The back page has a business ad for "Goodwin and Dodd," which offers "A large assortment of English and French Watches" - plus tools f... See More 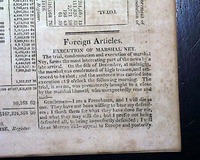 
NILES' WEEKLY REGISTER, Baltimore, February 3, 1816  One of the more notable items is the reporting (pages 401-402) of the  trial and execution of the beloved Frenchman Marshal Ney. Ney's execution was an example intended for Napoleon's other marshals and generals, many of whom were eventually exonerated by the Bourbon monarchy. Other news of the day is present throughou... See More 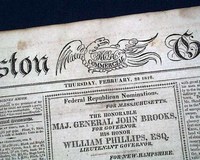 * The population of the town of Cincinnati in Ohio, according to a Census lately taken, is 6498, including 247 blacks and mulattoes. The population in 1810 was only 2320.

Other news of the day includes... See More