Newspapers containing articles written by or which contain references to Karl Marx. 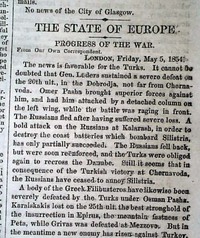 Item #653579
NEW YORK DAILY TRIBUNE, 1853-1856  Offered is an issue dated in the mid-1850's which provides the opportunity for a collector to own an original/authentic newspaper with an article written by Friedrich Engels, the communist revolutionary who would become more famous after his death than during his lifetime. Along with Marx, Engels wrote both "The Condition of the Working Class in Eng... See More 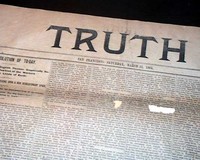 Short-lived labor newspaper with an article by Karl Marx's daughter...

During its brief life (1882-1884), "Truth" published local, national, and international labor news, along with a wide range of radical literature.
Page 3 has an article concerning Charles Delescluze, a French revolutionary leader, journalist, and military commander of the Paris Commune. It is signed in ... See More 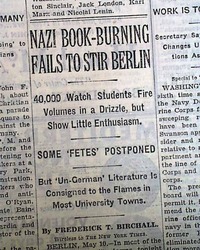 First report of the 1938 Nazi book burning in Germany...

The front page has one column headings that include: "NAZIS BOOK-BURNING FAILS TO STIR BERLIN" "40,000 Watch Students Fire Volumes in a Drizzle, but Show Little Enthusias" and more (see photos). Article continues on page 12 with smaller related subh... See More