Shop our selection of authentic original newspapers printed during the Vietnam War era and featuring coverage of the overseas conflict.

Shop our selection of authentic original newspapers printed during the Vietnam War era and featuring coverage of the overseas conflict.
Web Results (22) Listings on eBay (11) 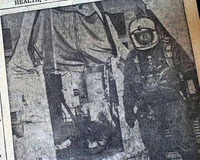 Other news, sports and advertisements of  the day throughout. Ve... See More 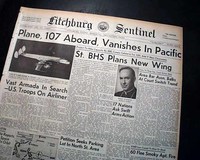 The front page has a banner headline: "Plane, 107 Abroad, Vanishes In Pacific" with subhead, related photo and map. First report coverage on the Flying Tiger Line Flight 739 airplane disappearance in the Western Pacific.
Complete with 16 pages, light toning at the... See More 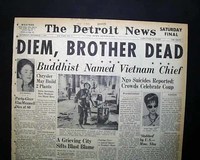 
THE DETROIT NEWS, Michigan, November 2, 1963  The banner headline reads "Diem, Brother Dead" with subheads "Buddhist Named Vietnam Chief" "Ngo Suicides Reported; Crowds Celebrate Coup". This was the military coup in Vietnam and includes a photo of the Saigon Palace which shows how that had been ransacked. A related article is 'Stabbed' by U.S. -- Mme. Nhu... See More 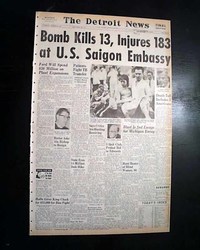 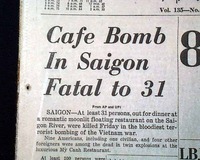 This 30+ page newspaper has a three line, two column headline on the front page: "Cafe Bomb In Saigon Fatal to 31" Tells of the My Canh floating restaurant bombing in Saigon Vietnam. Other news of the day including a nice headline on a airplane crash on t
... See More 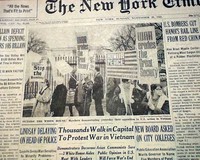 * March on Washington for Peace in Vietnam

The front page has a two column heading: "Thousands Walk in Capital To Protest War in Vietnam" with subhead and related photo. (see) First report coverage here.
Other news, sports and advertisements of the day. Complete in 70+ page Sunday edition, light toning at the margins, close cut along the right... See More 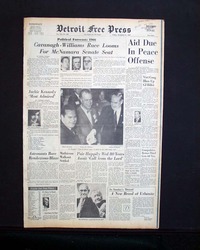 What was life like on New Year's Eve, 1965? This issue does a wonderful job of depicting the turning of the years during this formative time in world history.
Other news, sports an
... See More 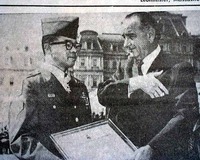 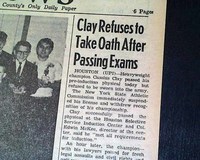 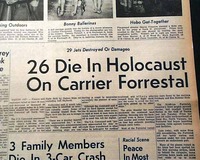 Other news of th... See More 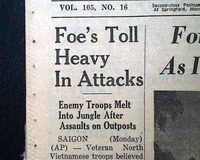 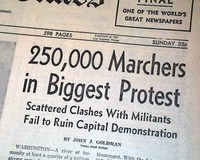 The top of the front page has a two column headline: "250,000 Marchers in Biggest Protest"  with subhead and related photo. First report coverage on largest single anti-war protest in U.S. history.
Incomplete issue containing 12 of the 26 pages... See More 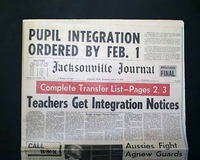 Desecration of the schools in the South... My Lai massacare probe...


JACKSONVILLE JOURNAL, Jacksonville, Florida, January 14, 1970 The front page of the issue contains bold headlines "Pupil Integration Ordered By Feb. 1" and "Teachers Get Integration Notices". The desecration would take place in Georgia, Florida, Alabama, Mississippi and Louisiana. Also on the front page is a report "GI List Growing In My Lai Probe" deals with the Army... See More 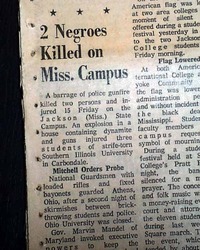 The front page has a one column heading: "2 Negroes Killed on Miss. Campus". 1st report coverage on the Jackson State University killings, which involved student protesters against the Vietnam War being shot at by police. This was shortly after the Kent St... See More 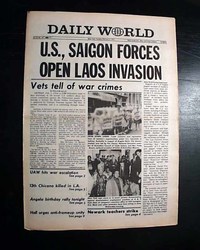 An uncommon title, being a tabloid-size newspaper with an editorial policy which reflects the views of the Communist party. This newspaper was previously known as the "Daily Worker".
The front page has a nice banner headline that reads: "U.S., SAIGON FORCES OPEN LAOS... See More 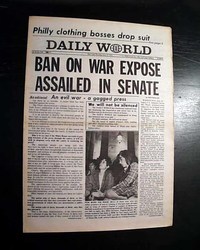 An uncommon title, being a tabloid-size newspaper with an editorial policy which reflects the views of the Communist party. This newspaper was previously known as the "Daily Worker".
The front page has a nice banner headline that r... See More 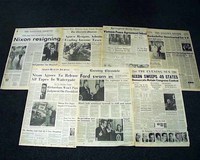 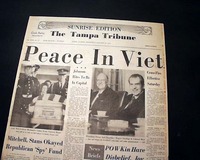 The front page has a nice banner headline: "Peace In Viet" with subheads and related photo.
Front leaf only (pages 1 & 2), a little wear along the bottom margin, nice for display as such.... See More 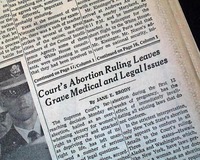 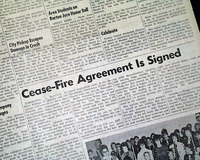 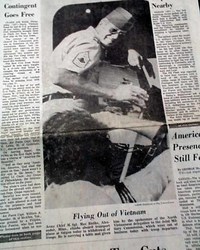 The front page has a nice banner headline: "After 12 Years, We Leave Vietnam" with subheads and related photo showing Master Sergeant Max Bielke leaving in a transport helicopter. Bielke is considered the last U.S. soldier to leave Saigon after the war.
Complete 1sat secti... See More 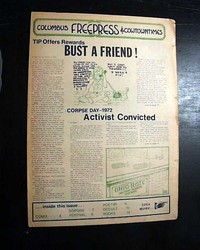 An underground newspaper from Columbus, Ohio...

This is an alternative journal published since 1970. Founded as an underground newspaper centered on anti-war and student activist issues, after the winding down of the Vietnam War it successfully made the transition to the alternative weekly format focusing on lifestyles, alternative culture, and inv... See More