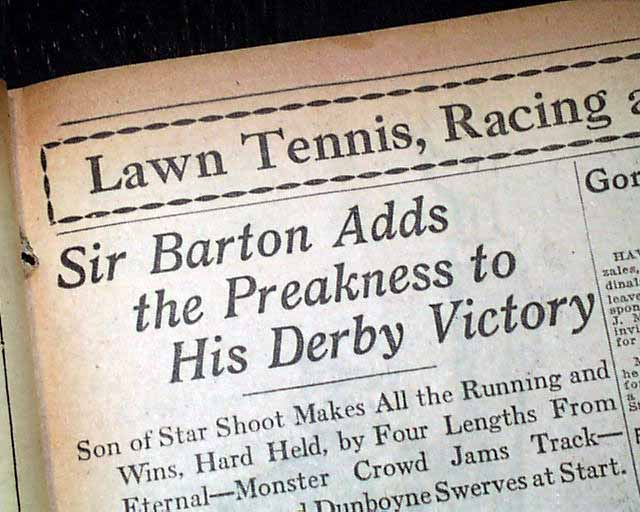 This 28 page newspaper has two column headlines on page 1811 that include: "Sir Barton Adds the Preakness to His Derby Victory" and more (see images). This was the 2nd of 3 historic wins for the famed horse.

Other news of the day throughout. Light browning with a little margin wear, otherwise good. Should be handled with care.

source: wikipedia: Sir Barton, (1916-1937), was a chestnut thoroughbred colt who in 1919 became the first winner of the American Triple Crown.

He was sired by leading stud Star Shoot out of the Hanover mare Lady Sterling. His grandsire was the 1893 English Triple Crown champion, Isinglass.

Sir Barton was bred in Kentucky by John E. Madden and Vivian A. Gooch at Hamburg Place Farm near Lexington. Madden raced him in his two-year-old season. He was entered in six races, winning none. Madden sold the horse in 1918 for $10,000 to Canadian businessman J. K. L. Ross.

Ross placed Sir Barton in the hands of trainer H. Guy Bedwell and jockey Johnny Loftus. At three, he made his season debut as a maiden in the Kentucky Derby. He was supposed to be the rabbit for his highly regarded stablemate, a horse named Billy Kelly. (A rabbit is a speed horse set up to wear out the rest of the field, thereby allowing another horse to win.) However, it was Sir Barton who led the field of 12 horses from start to finish, winning the race by five lengths. Just four days later, the horse was in Baltimore and won the Preakness Stakes, beating Eternal. Again he led all the way. He then won the Withers Stakes in New York and shortly thereafter completed the first Triple Crown in U.S. history by easily winning the Belmont Stakes, setting an American record for the mile and three-eighths race, the distance for the Belmont at the time. Amazingly, Sir Barton's four wins were accomplished in a space of just 32 days. He was voted the 1919 Horse of the Year, American racing's highest honor.

As a four-year-old, Sir Barton won five of the 12 races he entered during the 1920 season. In one of these races, the Saratoga Handicap, he beat the great Exterminator. However, it was his match race on October 12th that year against the great Man o' War at Kenilworth Park in Windsor, Ontario, Canada that is most remembered. Sir Barton, bothered by sore hooves on Kenilworth's hard surface, was beaten by seven lengths. He retired to stud that year, virtually forgotten by the public. In 1922 Ross sold Sir Barton to B. B. Jones who stood him at his Audley Farm in Berryville, Virginia, where he remained until 1933 [1]. As a sire, Sir Barton enjoyed only moderate success and spent the better part of the rest of his life as a working horse with the U.S. Army Remount service in Fort Robinson, Nebraska until being sold to rancher J.R. Hylton in Douglas, Wyoming.

Sir Barton died of colic on October 30, 1937 and was buried on a ranch in the foothills of the Laramie Mountains. Later though, his remains were moved to Washington Park in Converse County, Wyoming where a memorial was erected to honor America's first Triple Crown winner.

Sir Barton was officially recognized by the governing body as the first triple crown winner in 1948 [2]. He was inducted into the National Museum of Racing and Hall of Fame in 1957. In the Blood-Horse magazine ranking of the top 100 U.S. thoroughbred champions of the 20th Century, he is no. 49.