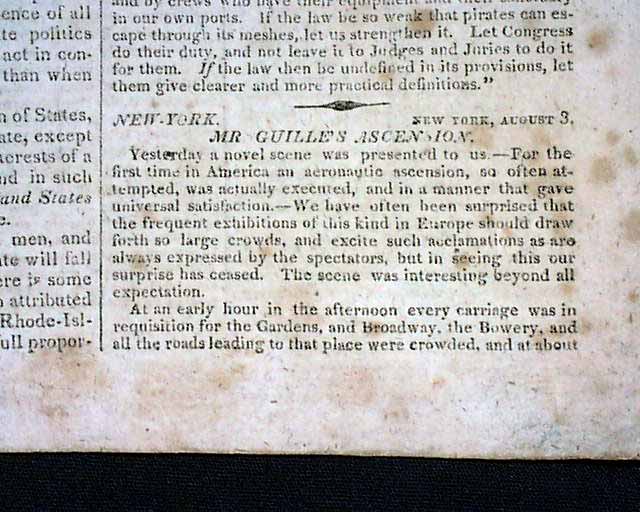 COLUMBIAN CENTINEL, Boston, Aug. 7, 1819  The bottom of the front page has the beginning of a report on the first manned parachute (made from a balloon) headed: "Mr. Guilles Ascension". It includes in part: "The scene was interesting beyond all expectation. At an early hour in the afternoon every carriage requisition for the Gardens, and Broadway, the Bowery and all roads leading to that place were crowded...".  The article carries over to page 2 where is: "...At 18 minutes past six, Mr. Guille advanced to...the circle, and after making some... examination ...of the cords, which connected the Parachute with the Balloon, he took leave of his wife...took his position in the basket. In an instant the Balloon began to ascend ....to a great height...In less than 10 minutes the Parachute was detached...and for nearly half an hour gradually descending...." with further detail. An exciting report about an incredible feat listed in the reference book, "Famous First Facts".
The front page also has: "Thoughts on The Separation of Maine" and: "Trial of The Pirates".
Four pages, lite foxing with just a bit in this report, generally nice.