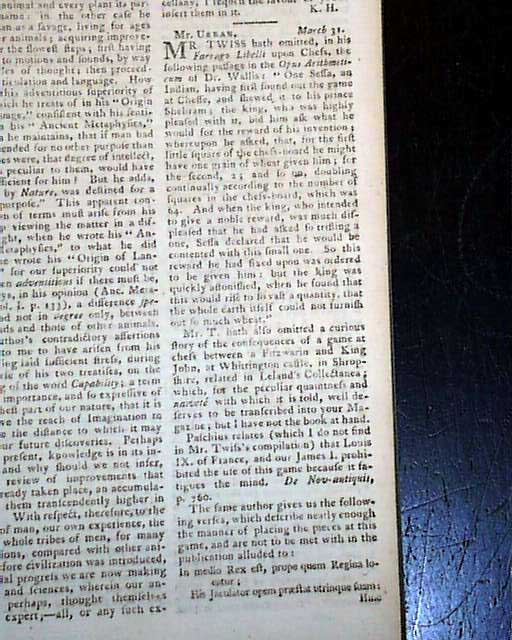 Item # 666346 THE GENTLEMAN'S MAGAZINE, London, May, 1788  Near the back under the "Domestic Occurrences" heading is a report reading: "By the last accounts received from the fleet from Botany Bay, they arrived at the Cape of Good Hope on the 13th of October last and expected to sail again about the middle of Nov. and to proceed directly for their place of destination. They were very healthy, and the convicts very orderly. The number of deaths from England to the Cape amounted to 21."
This is a very early account of the use of Australia as a penal colony, and the establishment of the very first British settlement there.
Two pages have considerable detail regarding the game of chess which includes a mention of Benjamin Franklin. Yet another section has considerable discussion regarding the slave trade.
All three plates called for are present.
Complete in 96 pages, full title/contents page featuring an engraving of St. John's Gate, 5 1/4 by 8 1/2 inches, great condition.