Home > Back to Search Results > Handsome issue from the midst of the Revolutionary War...
Click image to enlarge 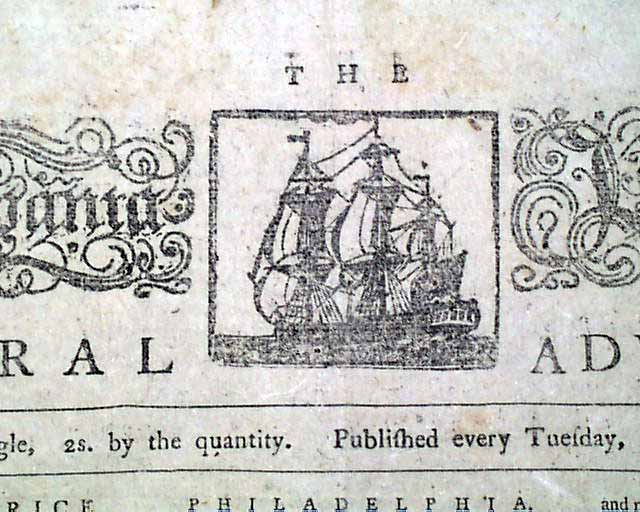 Handsome issue from the midst of the Revolutionary War...


THE PENNSYLVANIA PACKET OR THE GENERAL ADVERTISER, Philadelphia, May 8, 1779

The front page has an "Act" and "A Supplement to an Act", passed by the General Assembly of Pennsylvania, each signed in type: John Bayard & John Morris.
Page 2 has three letters that appeared in London papers, each discussing in various ways the situation in America. The letters are respectively signed in type: Julian, A Consistant Whig & Thousands. "From the Virginia Gazette" is a lengthy letter criticizing a previous letter that was written by Carter Braxton (a signer of the Declaration of Independence. The letter is signed in type: A Virginian.
On page 3 is a letter datelined "Princeton, New Jersey, May 3, 1779" that describes the "present state" of the "College", signed in type: John Witherspoon (a signer of the Declaration of Independence) and William CH. Houston. A brief notice about a meeting of the Constitutional Society at the German School House in Church Alley, is signed in type: Charles W. Peale. There is also a notice offering a reward about "...a Hessian deserter, named Charles...", and one offering a reward for a runaway "...Negro Wench named Nants...".
The back page has a reward ad for a deserter from Capt. Carbary's troop of light dragoons. The masthead has ornate lettering and an engraving of a ship.
Four pages, never-trimmed margins, very small bit from the blank spine margin, very nice, clean condition.