Home > Back to Search Results > Grant's charge before Vicksburg...
Click image to enlarge 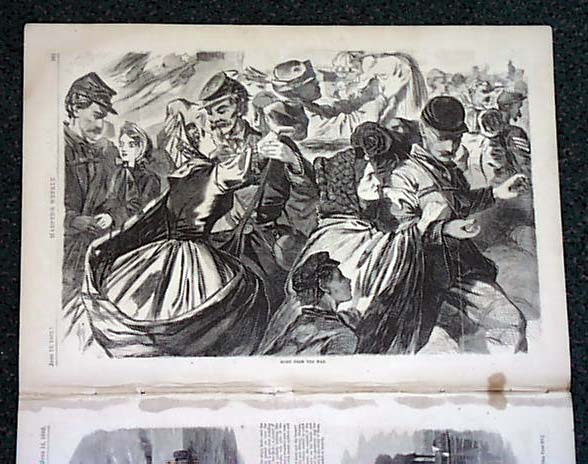 
HARPER'S WEEKLY, New York, June 13, 1863  Perhaps the most notable print is the full page by famed artist Winslow Homer, titled: "Home From the War" showing soldiers embracing their wives & children.
The front page has prints of: "Major-General John A. Logan" and "General Logan Crossing the Bayou Pierre in Pursuit of the Rebels". Other prints include a full page by Thomas Nast: "A Group of Union Prisoners Escorted through a Rebel Town"; a full page with 3 prints: "The Battle of Raymond--Rebel Charge on Logan's Division--Opening the Battle of Raymond--Shelling the Rebel Rear". Also: "Sinking Torpedoes In Charleston Harbor by Moonlight" "King Cotton Captured--The Cotton of the Attakapas Region Pouring Into Brashear City, La."
The doublepage centerfold is a dramatic print of: "Major-General Ulysses S. Grant Before Vicksburg" showing him charging on horseback.
The back page has a cartoon: "The Irish Exodus". Complete in 16 pages.