The Attack on Fredericksburg... Nast centerfold...

Text and prints on the Battle of Gettysburg...

The Battle of Gettysburg and much more...

The Siege of Charleston, Fort Wagner, & the ruin of Lawrence, Kansas...

A White Hand and a Black Thumb...

Thomas Nast was an artist, who at one time in his career, wielded enough power to make or break a politician's campaign for the U.S. Presidency.

Nast exercised that influential power in the election of 1884 between Grover Cleveland and James G. Blaine. His reluctant support of Cleveland (Nast was a staunch Republican, but severely distrusted Blaine) through his political cartoons in Harper's Weekly is believed to have helped capture the small margin by which Cleveland secured the presidency. This was the last political campaign Nast covered for Harper's Weekly. 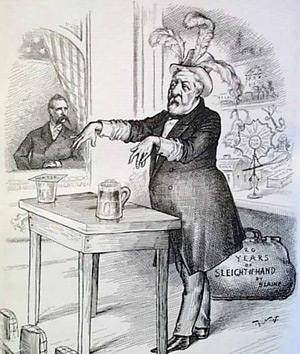 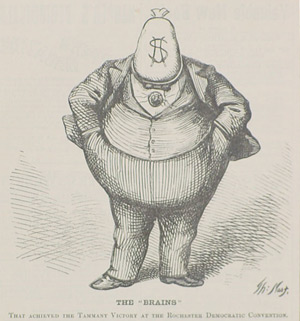 The caption reads: “The âBrains' That Achieved the Tammany Hall Victory at the Rochester Democratic Convention.”

Nast is also well-known for creating a negative image of a corrupt New York politician, William Magear (Boss Tweed). His cartoons painted a scathing picture of Tweed as a thief. Nast railed against Tweed's greed and corruption and led the negative charge to oust Tweed from power. Nast's negative depictions so infuriated Tweed that he commanded his men to “Stop the [darn] pictures. I don't care what the papers write about me. My constituents can't read. But, [darn] it, they can see the pictures.” Eventually, Tweed's rivals turned on him and provided evidence of his corruption to local newspapers. Tweed was arrested and convicted of fraud.

Among other accomplishments, Nast is arguably most well-known for his depiction of Santa Claus (pictured below). Nast's version of Santa first appeared in Harper's Weekly in 1862 and remains familiar to us today.

Contrary to popular belief, Nast was not solely responsible for creating the donkey and elephant symbols of the Democratic and Republican parties, respectively. However, he was heavily influential in creating the personification of the U.S. government (Uncle Sam) as we know it today, and popularizing the Democratic Donkey and Republican elephant. He used all three of these symbols in his artwork frequently. 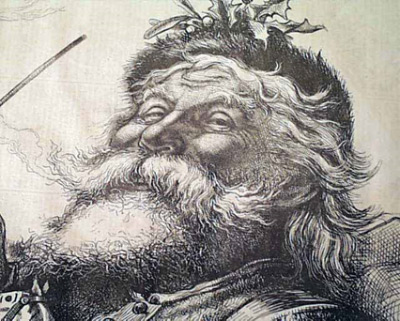 "Merry Old Santa Claus" is easily the most desired of all the Thomas Nast Santa Claus prints (Harper's Weekly, January 1, 1881).

We welcome you to browse our wide selection of Thomas Nast's classic artwork. Please be sure to contact us at 570-326-1045 or info@rarenewspapers.com if you would like help finding a specific print or issue.