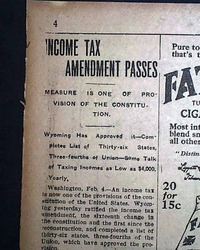 The passing of the 16th Amendment...

Page four carries a column-wide headline "INCOME TAX AMENDMENT PASSES" with subheads "Measure Is One of Provision of the Constitution" "Wyoming Has Approved It - Completes List of Thirty-six States, Three-fourths of Union - Some Talk of Taxin... See More 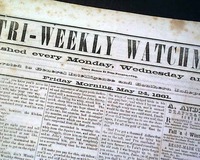 Never before have we offered a newspaper from Sumter, S.C. The title as printed at the top of pages 2 & 3 is “Sumter Tri-Weekly Watchman”. Within the masthead is printed: “Devoted to General Intelligence and Southern Independence.”  Perha... See More 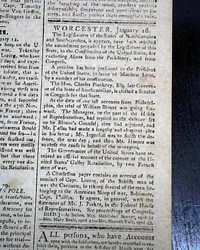 * re. Aliens omitted for the presidency - Congress
* United States Constitution in the Carolinas

Page 3 has an interesting item that reports: "The Legislatures of North Carolina and South Carolina...have both rejected the amendment proposed by the Legislature of this State, to the Constitution of the United States, fo
... See More 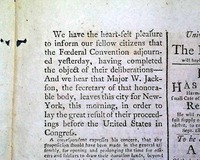 Announcement that the Constitution has been created...

* In regards to historic announcements in U.S. history, this is rivaled only by the announcement that the Declaration of Independence had been signed

A singularly historic newspaper and the first time this issue has been ... See More 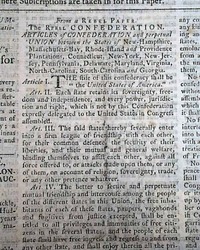 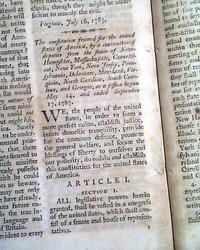 This title, along with the "Columbian Magazine", has the honor of being the first successful American magazine, both published in Philadelphia. The Museum was published by Mathew Carey and existed from January, 1787 thru the end of 1792. He was very proud of h... See More 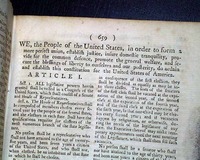 Philadelphia printing of the Constitution of the United States...

This title, along with the "American Museum", has the honor of being the first magazine to print the Constitution of the United States. Both publications were from Philadelphia, the city where the Constitution was created. Comment... See More 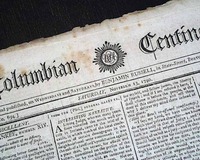 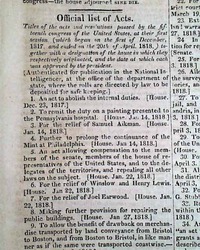 This small size newspaper began in 1811 and was a prime source for national political news of the first half of the19th century. As noted in Wikipedia:
"Niles edited and published the Weekly Register until 1836, making it into one of the most widely-circulated magazines in the United States and himself into ... See More 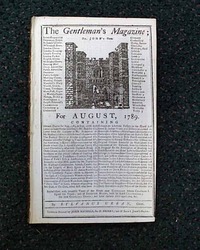 Item #121156
GENTLEMAN'S MAGAZINE, London, August, 1789  Among the articles are one concerning "...the new grass brought from the banks of the Santee in South Carolina..." with details, and includes 2 illustrations on a full page plate; "Strictures on the Absurd Custom of Dueling" "Proposal for the Prevention of Dueling" and so much more. Near the back is news headed: &qu... See More 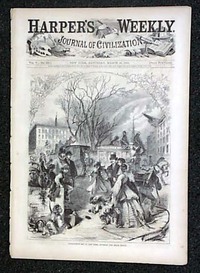 
HARPER'S WEEKLY, New York, March 30, 1861  The full front page is a print titled: "April Fool's Day In New York, Opposite the Astor House". Inside has a page with prints of New Orleans: "View In French Quarter" & "The Crescent City" from the docks; and "The Levee" and 2 scenes of: "Lafayette Square". Also inside are a two-thirds pr... See More 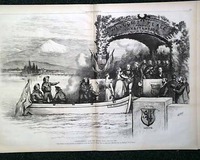 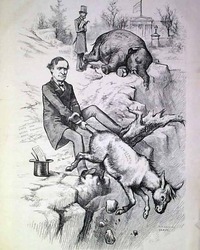 First appearance together of the Democratic donkey & Republican elephant...


HARPER'S WEEKLY, New York, December 27, 1879  An ideal issue for any political junkie as it contains the famous Thomas Nast print with the first appearance together of the Republican elephant & Democratic donkey. Thomas Nast was the creator of these two famous political symbols making this a very significant print. The caption reads: "Stranger Things Have Happened."
The ba... See More 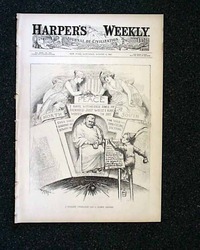 Death of the president of the Mormon Church... 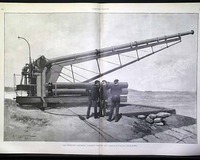 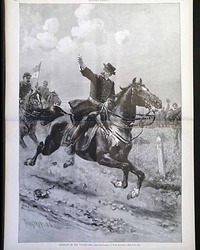 
HARPER'S WEEKLY, New York, August 11, 1888  The entire ftpg. is taken up with an illus. of various cavalrymen, including a feature illus. of "The Scout". Nice fullpg: "Selling 'Auction Pools' on a Horse Race". Full page: "Representative Northern and Southern Senators".
Nice doublepage centerfold: "Sheridan in the Valley--1864" showing him c... See More 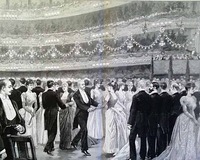 
HARPER'S WEEKY, New York, January 18, 1890  Front full pg. illus. of "Mme. Lilli Lehmann-Kalisch, in the Title Role of Goldmark's Opera 'The Queen of Sheba'." Inside is a full pg. illus. of "The Pulitzer Building, the New Home of the New York 'World'." 1/2 pg. illus. of "In the Cave of the Dead."
Doublepage centerfold: "The Sir Roger... See More 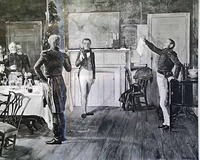 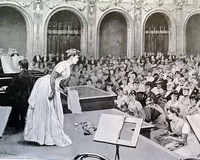 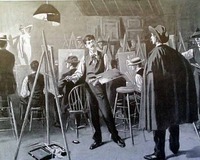 
HARPER'S WEEKLY, New York, June 23, 1894  Full ftpg. political cartoon re. income tax. Fullpg. with 9 photos of: 'The Recent Excavations at Dashur, Egypt'. Three pgs. with many illus. on 'The Iroquois of the Grand River'. Fullpg. with 8 photos of the foods in Pueblo, Colorado and Portland, Oregon.
Complete issue. 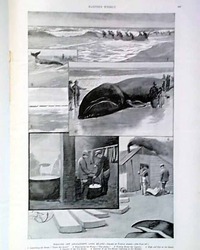 
HARPER'S WEEKLY, New York, April 10, 1897  Full front page illus. of "The Senator From Massachusetts Interrupts." Inside is a full pg. of illus. of "From the Nineteenth Annual Exhibition of the Society of American Artists."
Full pg. of illus. of "Scenes from Moliere's 'Bourgeois-Gentilhomme,' Produced by Le Cercle Francais of Harvard University."... See More