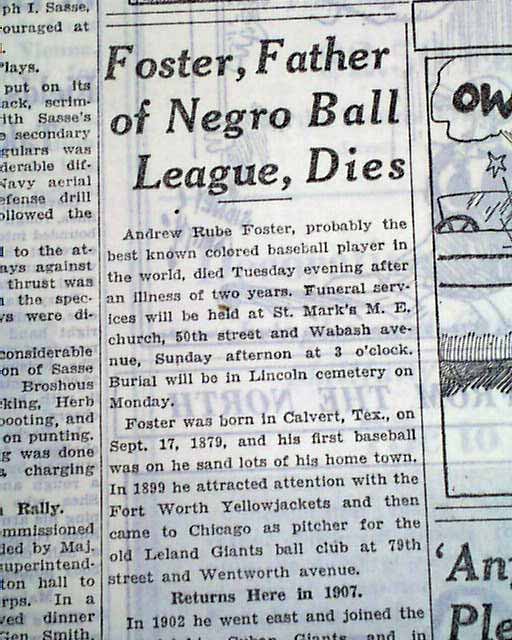 Page 24 has a one column heading: "Foster, Father of Negro Ball League, Dies" (see) First report coverage on the death of Andrew "Rube" Foster, founder of the Negro National League. He is known as the "Father of Black Baseball.
Complete with all 34 pages, rag edition in great condition. A few small binding holes along the spine.

wikipedia notes: Andrew "Rube" Foster was an American baseball player, manager, and executive in the Negro leagues. He was elected to the Baseball Hall of Fame in 1981.
Foster, considered by historians to have been perhaps the best African-American pitcher of the first decade of the 1900s, also founded and managed the Chicago American Giants, one of the most successful black baseball teams of the pre-integration era. Most notably, he organized the Negro National League, the first long-lasting professional league for African-American ballplayers, which operated from 1920 to 1931. He is known as the "father of Black Baseball."
Foster adopted his longtime nickname, "Rube", as his official middle name later in life.