Home > Back to Search Results > The Black Hole of Calcutta...
Click image to enlarge 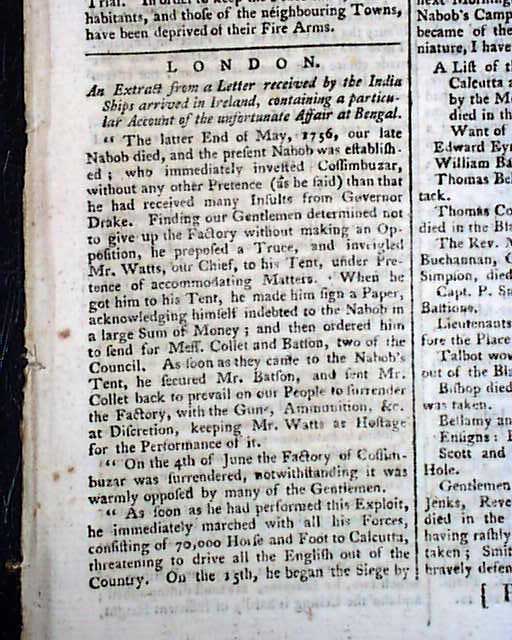 The Black Hole of Calcutta...


THE LONDON CHRONICLE, England, June 9, 1757  Most of the front page is taken up with: "An Extract from a Letter Received by the India Ships...containing a particular Account of the unfortunate Affair at Bengal."
In this report which deals with the capture of Fort William in India, mention is made that: "...The whole number left in the Fort being 250 effective men, we held out till the 20th in the evening...a flag of truce was hung out...The same night 170 of us were crammed into a Hole not large enough for 50 of us to breathe in; the effect of it was that only 16 were alive the next morning..." with a bit more including: "Europeans who were in Calcutta when it was taken, but escaped being put into the Black Hole, & were ordered to leave Calcutta by the Moors...".
Also included is: "A List of the Persons killed in the defence of Calcutta & Fort William..." which includes several mentions of "The Black Hole".
The "Black Hole of Calcutta" was a small dungeon in Fort William, India, where troops of the Nawab of Bengal, held British prisoners of war after the capture of Fort William on June 20, 1756.
Eight pages, 8 1/4 by 11 1/4 inches, great condition.