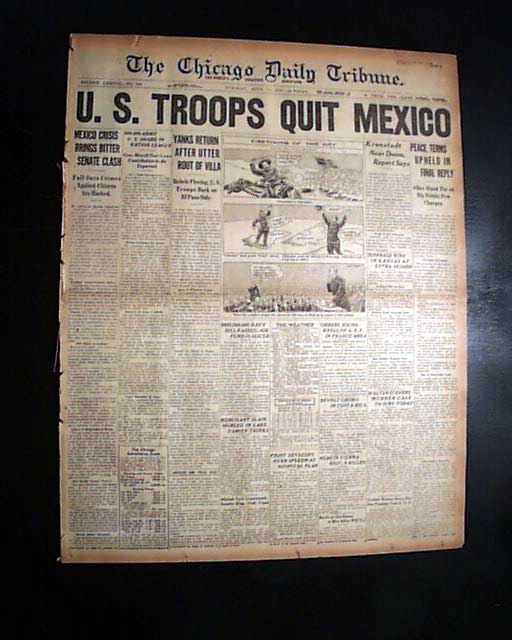 The front page has a great banner headline: "U. S. TROOPS QUIT MEXICO" with subheads that include: "YANKS RETURN AFTER UTTER ROUT OF OF VILLA" with related illustration. (see) Nice for display. First report coverage on the United States victory in the Battle of Ciudad Juarez.
Complete with 34 pages, light toning and a little wear at the margins, generally good.

wikipedia notes: The Third Battle of Ciudad Juarez, or simply the Battle of Juarez, was the final major battle involving the rebels of Francisco "Pancho" Villa. It began on June 15, 1919, when Villa attempted to capture the border city of Ciudad Juarez from the Mexican Army. During the engagement the Villistas provoked an intervention by the United States Army protecting the neighboring city of El Paso, Texas. The Americans routed the Villistas in what became the second largest battle of the Mexican Revolution involving the US, and the last battle of the Border War. With the American army closing in, the Villistas had no choice but to retreat. Pancho Villa then attacked Durango but lost again, so he retired to his home at Parral, Chihuahua in 1920, with a full pardon from the Carrancista government.