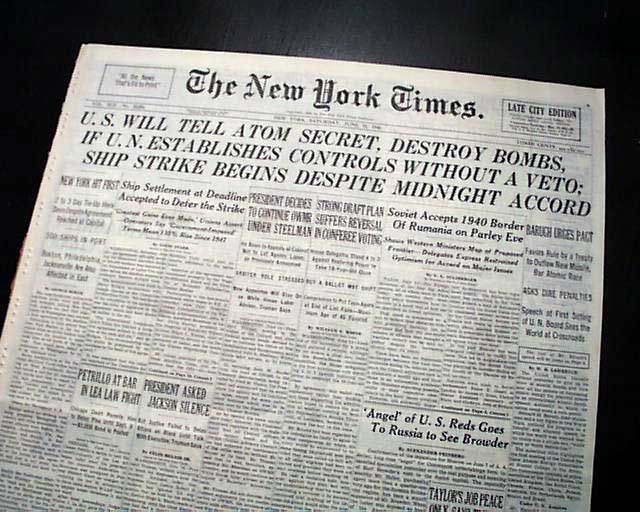 The front page has a nice banner headline: "U.S. WILL TELL ATOM SECRET, DESTROY BOMBS, IF U.N. ESTABLISHES CONTROLS WITHOUT A VETO" with subheads. (See) Complete text of Baruch's speech is on page 4.
Complete with all 36 pages, rag edition in nice condition.

wikipedia notes: The Baruch Plan was a proposal by the United States government, written largely by Bernard Baruch but based on the Acheson–Lilienthal Report, to the United Nations Atomic Energy Commission (UNAEC) during its first meeting in June 1946. The United States, Great Britain and Canada called for an international organization to regulate atomic energy and President Truman responded by asking Undersecretary of State Dean Acheson and David E. Lilienthal to draw up a plan. Baruch's version of the proposal was rejected by the Soviet Union, who feared the plan would preserve the American nuclear monopoly. Its collapse led to the beginning of the Cold War arms race.