Home > Harriet Tubman is near death...
Click image to enlarge 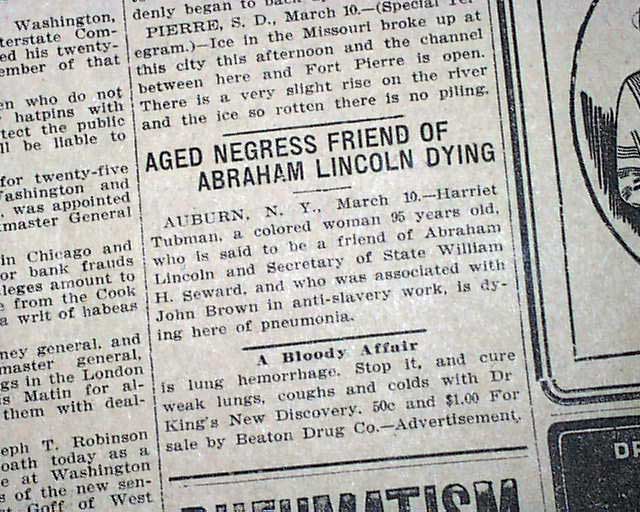 Harriet Tubman is near death...


THE OMAHA DAILY BEE, Nebraska, March 11, 1913  Page 3 has a somewhat inconspicuous report on the near death of the famed Harriet Tubman.
The report is headed: "Aged Negress Friend Of Abraham Lincoln Dying" and reads: "Harriett Tubman, a colored woman 95 years old, who is said to be a friend of Abraham Lincoln and Secretary of State William H. Seward, and who was associated with John Brown in anti-slavery work, is dying here of pneumonia."
A curiously brief report giving her extraordinary life. A noteable that of the many volumes of newspapers in our inventory this is the only report of her death (or nearly so) that we could find.
Fourteen pages, all leaves are loose with various chipping at the margins, margin tears as well with some archival mends. This issue is very fragile & must be handled carefully.