Home > Back to Search Results > Discussion of a letter from George Washington...
Click image to enlarge 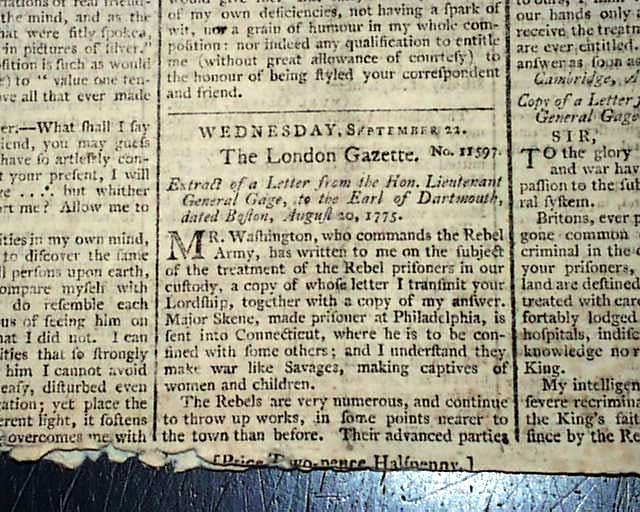 Discussion of a letter from George Washington...


LONDON CHRONICLE, Sept. 21, 1775  The front page has an: "Extract of a Letter from the Hon. Lieut. Gen. Gage, to the Earl of Dartmouth" regarding a letter from "Mr. Washington" and his concern about "Rebel prisoners". Hereafter is Washington's letter to Gen. Gage, signed in type: G. Washington, followed by Gage's reply, which concludes on pg. 2, signed in type: Thomas Gage.
Taking most of an inside pg. is a letter from Benjamin Harrison of Virginia (a Declaration signer) to General Washington, plus one from John Adams to his wife Abigail, and another letter from Adams to Col. Warren, all intercepted by the British.
Eight pages, archival repair at the spine, minor loss at the bottom margin does not affect any noted content