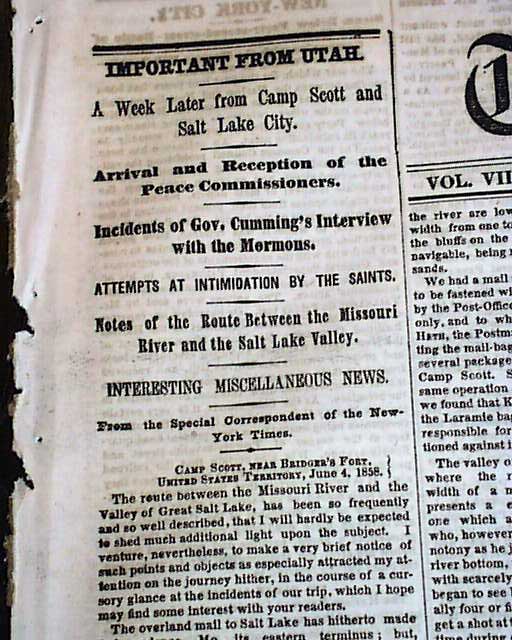 Certainly a terrific issue for any student of Mormon history, as the entire front page is taken up with such content, with headings at the top of the front page including: "IMPORTANT FROM UTAH" "A Week Later from Camp Scott and Salt Lake City" "Arrival & Reception of the Peace Commissioners" "Incidents of Gov. Cumming's Interview with the Mormons" "Notes of the Route Between the Missouri River & the Salt Lake Valley" "Interesting Miscellaneous News" with the report carrying over to the back page where it takes an entire column as well. Plus, pg. 4 has yet further reports on the Mormons with a column headed: "Army Order Relative to the Troops on Route for Utah" "Gen. Harney to Assume Command of the Deptartment of the West--Gen. Johnston to Remain in Utah". Also on pg. 4 is: "The Slave Trade" which takes up almost a full column.  I'm not sure if I've seen such extensive Mormon reporting in a single pre-Civil War newspaper.
Complete in 8 pgs., minor irregularity along the spine, nice condition.