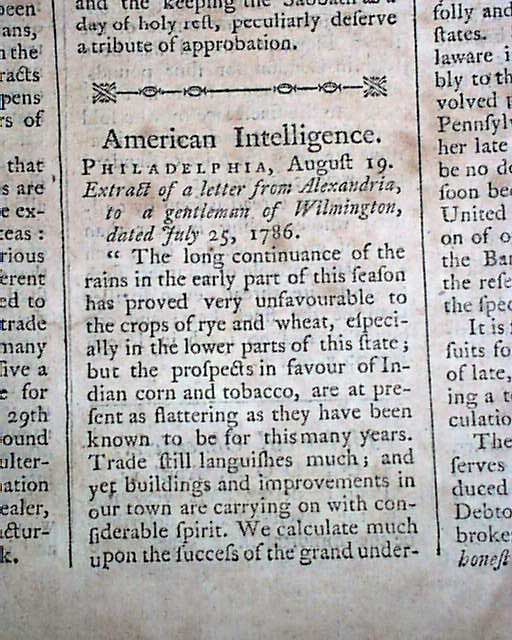 
THE NEW-HAVEN GAZETTE & THE CONNECTICUT MAGAZINE, Aug. 31, 1786 (year in Roman numerals)   One page has "American Intelligence" which praises the attributes of Alexandria, and another page notes: "...Our Academy flourishes: about 100 scholars, twenty of which are educated on the Bounty of General WASHINGTON, are already received into it, although it has not been opened more than six months..." followed by a report from Pittsburgh concerning trouble with Indians.
But certainly the prime content would be the back page "Resolve" from Congress dated August 8, 1786, establishing the standard of money to be created by the United States, starting with: "That the standard of the United States of America, for gold & silver, shall be eleven parts fine and one part allow...a dollar shall contain of fine silver, 375 grains, and  64/100 of a grain..." followed by details on the weight I contents of the cent, dime and the two gold coins called 'An Eagle' and 'A Half-Eagle'..." with other particulars. A very significant report for any student of financial history as well as for any coin collector.
Eight pages 9 by 10 1/4 inches, never-trimmed margins, various foxing, good condition.