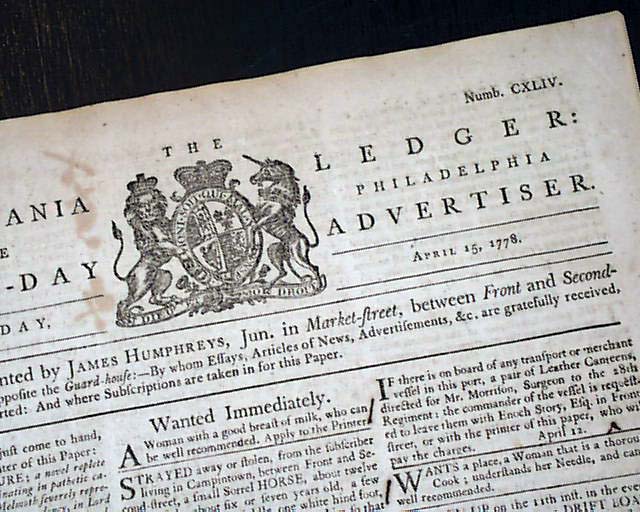 
THE PENNSYLVANIA LEDGER OR THE PHILADELPHIA MARKET-DAY ADVERTISER, April 15, 1778  This was a strongly Tory (supportive of the British cause) newspaper which began in 1775 and closed shop in May of 1778 when the British evacuated Philadelphia.
The front page is entirely taken up with ads including one for a man who deserted the ship "Nancy Transport".
Page 2 includes reports from the House of Commons in London, a portion of which includes: "...The Canada expedition did not pass unnoticed; the disgrace brought on the British arms was set forth in the most melancholy colours & Lord George Germaine, as the ostensible Minister of that unfortunate expedition, became the object of Mr. Fox's censure and invective...".
Pg. 2 also has a report reading in part: "...officer who attended Gen. Howe from Philadelphia...gives the following reason for not attacking the American camp at White Marsh. 'For a quarter of a mile in front of the American lines was the thickest abbatis of felled trees I ever saw, similar to what the French had last was at Ticonderoga...the Americans had several strong posts immediately behind their camp...". Other pg. 2 reports include: "...have made the culprit a Brigadier-General & continued him in the command at Cambridge, where General Burgoyne with his troops yet remains in the barracks on Prospect Hill & thereabouts..." with more. There is also a "PROCLAMATION" signed in type by: W. Howe concerning trade with the various colonies.
Pg. 3 is entirely taken up with ads including one for the sale of a Negro man.
More than the entire first column on the back page is taken up with reports under the dateline of "New York" with various items relating to the Revolutionary War.
Four pages, light damp stain to a lower corner, numeric notations in margins next to ads (this was the editor's copy), generally in nice condition. Not surprisingly, being a Tory newspaper the masthead features an engraving of the Royal coat-of-arms.  Not surprisingly, being a Tory newspaper the masthead features an engraving of the Royal coat-of-arms.