Home > Back to Search Results > Deaths from the Great Plague...
Click image to enlarge 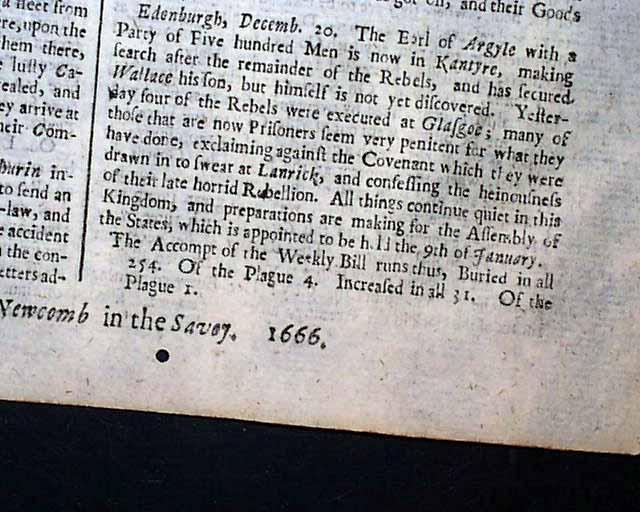 Deaths from the Great Plague...


THE LONDON GAZETTE, England, Dec. 27, 1666  The front page has a very brief Judaica item from Vienna: "The Jews have made their present to the Empress of a large silver bason, and in it a child of silver, or excellent workmanship, weighting 28 Mark."
The bottom of the back page has the weekly report of deaths from the Plague, reading: "The Account of the weekly bill runs thus. Buried in all 254. Of the Plague 4. Increased in all 31. Of the Plague 1."
Complete as a single sheet newspaper, 7 by 11 inches, great condition. This is the world's oldest continually published English language newspaper, having begun in 1665 and is still publishing today.

World history notes that 1666 was perhaps the most "dismal" year of the 17th century, as the Great Plague ravaged England & other portions of Europe but most notably the crowded city of London where it is estimated up to 100,000 people succumbed to the plague, about  20% of the city's population. But many other cities of England suffered its ravages as well. The disease was historically identified as bubonic plague. Additionally the Great Fire of London happened in 1666 ,just a few months prior to the publication date of this newspaper.