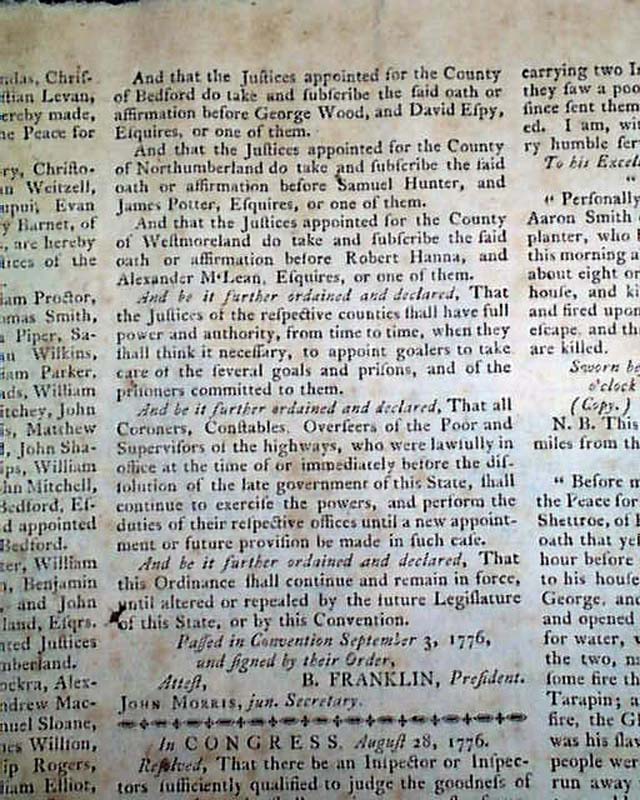 This was a decidedly Tory newspaper, supportive of the British efforts in America. This newspaper ended publication in June, 1778 when the British evacuated the city.
One-third of the front page & nearly half of page 2 are taken up with An ORDINANCE for the Appointment of Justices of the Peace for the State of Pennsylvania" which is signed in type by its President: B. Franklin. This is followed by a document from Congress concerning the purchase of gun powder, signed in type by its President: John Hancock. Page 2 also has two depositions concerning a battle with the Cherokee Indians.
A similar report of a battle with the Cherokees is on page 3, followed by a report from Charleston concerning naval affairs. But the prime content is the nice page 3: "Extract of a Letter from New York, dated Sept. 1" reporting on the historic Battle of Long Island. The letter has much detail and does mention that: "...Generals Sullivan and Sterling are both prisoners..." with so much more.
Almost a full column on the back page is a document from Congress concerning lifetime disability pay for those wounded in the war. It is signed in type by the President of Congress: John Hancock.
Four pages, damp stain to a lower corner, scattered foxing, numeric notations next to ads (this was the editor's copy), nice condition.