Home > Back to Search Results > Creating rules for the military...
Click image to enlarge 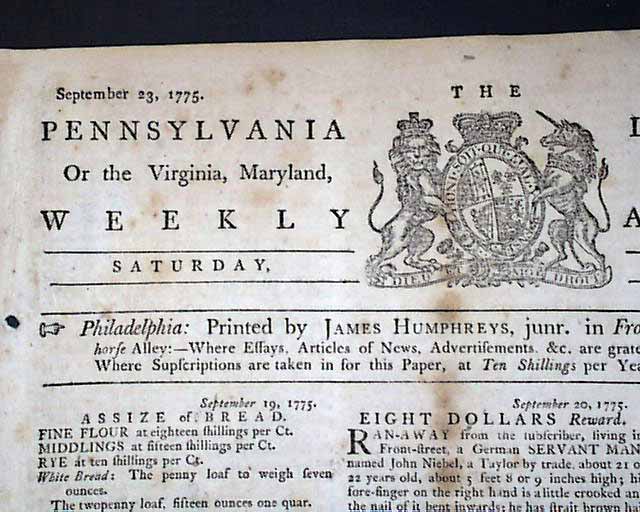 Creating rules for the military...


PENNSYLVANIA LEDGER, Philadelphia, Sept. 23, 1775  A terrific issue on the creation of the rules which govern those in the military, as nearly half of the front page and over a column on pg. 4 are taken up with: "Articles of Association, in Pennsylvania. We the officers and soldiers engaged in the present Association for the defence of American liberty...do voluntarily & freely...adopt...the rules by which we agree & resolve to be governed in all our military concerns & operations..." followed by a list of the 32 rules, each detailed (see for portions).
Pages 2 and 3 have various war-related content including a letter from Ticonderoga which notes: "...that Col. Allen, with 400 men, had cut off the communication between St. John's and Montreal..." with more. Another item includes: "...is an intention formed by some of the inhabitants...of publickly exposing & punishing, before conviction, certain persons supposed to be unfriendly to the Case of Liberty..." with more concerning this.
The back page has an interesting advertisement for a print of: "An Exact View of the Late Battle at Charlestown, June 17th, 1775 In which an advanced party of 700 Provincials stood an attack made by 11 Regiments and a train of artillery of the Ministerial forces, and after an engagement of two hours retreated to their main body at Cambridge..." with more. This was the Battle of Bunker Hill.
Four pages, some foxing, numeric notations next to ads (this was the editor's copy), Royal coat-of-arms in the masthead, very nice condition.