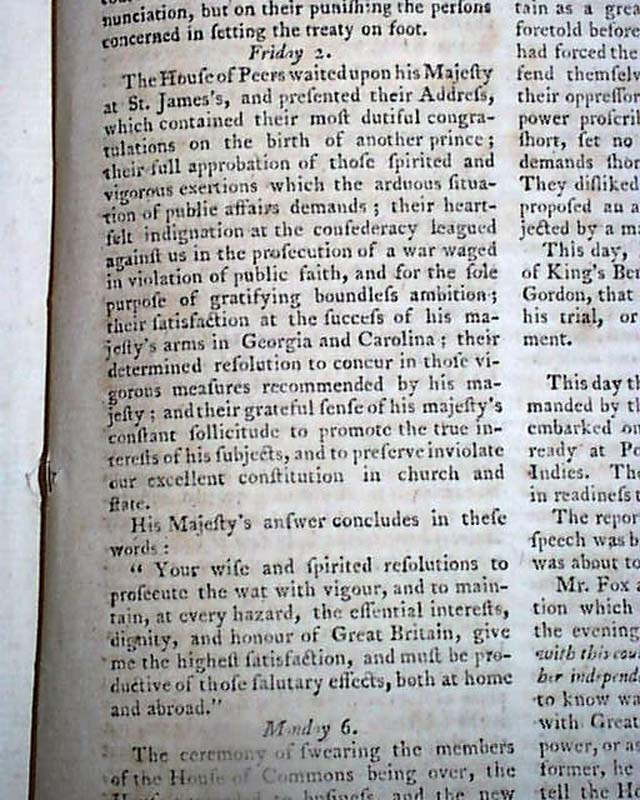 Within the "Historical Chronicle" near the back of the issue is a portion which notes: "...These gentlemen were reply'd to by others in opposition, who in thee accumstom'd style execrated the American war & denounced vengeance on those who had been the cause of it...all the evils with which we are not threatened, & the loss of our transmarine possessions; the independency of the colonies; their accession to the power of our natural enemies; & their possession as essential to the very being of Great Britain as a great nation, was all foreseen & foretold before the tyranny of administration had forced the colonies to take up arms to defend themselves against the frantic acts of their oppressors...".
A bit further on: "...Ld. Geo. Germaine had made the evening before, that America would break with this country to-morrow provided we allowed her independency. What he...wished to know was, whether America would break with Great Britain for herself as a separate power, or as an alliance with France..." with more.
Another report mentions of a letter from Sir Henry Clinton: "...the American Major-gen. Arnold had quitted the rebel service and joined the kings standard; and of the unfortunate failure of a plan, which he had the most sanguine hopes, if carried into execution, would have been productive of the greatest consequences to his Majesty's service, but which terminated most fatally for Major Andre...who being taken prisoner, was...condemned...to suffer death; which was ordered by the rebel general Washington to be carried into execution upon that...gentleman on the 2d inst..." with more (see).
Includes the only plate called for, being: "An Extraordinary Appearance in a Mist near Lancaster..." with a related article.
Complete in 48 pages, 5 by 8 1/4 inches, full title/contents page with an engraving of St. John's Gate, nice condition.