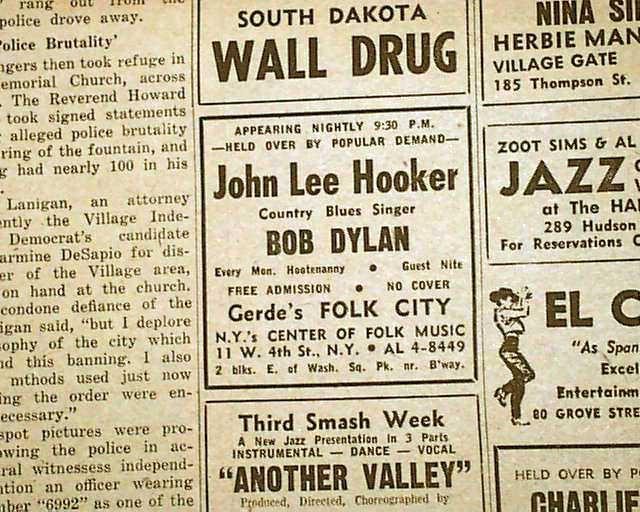 An exceedingly significant newspaper which offers witness to the birth of the music career of the legendary Bob Dylan. And perhaps no better title exists for this content. Indeed, this notice may only have appeared in the Village Voice.
First, it is worth noting that "The Village Voice" was an American news and culture paper, known for being the country's first alternative newsweekly. Founded just 6 years previous in 1955, the Voice began as a platform for the creative community of New York City.
Page 8 has an advertisement for Gerde's Folk City, a restaurant-turned-music venue which opened in Greenwich Village in 1960 & is referred to by Rolling Stone as one of the 3 top music venues in the world. It's opening night featured Logan English, an American folk singer, poet, actor, and playwright.
Bob Dylan played his first professional gig at Gerde's on April 11, 1961, supporting country blues singer John Lee Hooker. Logan English was instrumental in securing Dylan his first appearance.
His widow, Barbara Shutner, said: "My husband Logan English and I met Bob Dylan at Bob and Sid Gleason's house ... One night we were all sitting around and Woody [Guthrie] said something like, 'Play something' to this kid sitting on the couch. The kid was Bob Dylan, and he sang and it was just beautiful. So Logan said, 'I'm working at Gerde's. I'm the MC. We'll get you to play there.' So that Monday night, Bob came in and did his first set."
See the photo for the advertisement which references this appearance: "Appearing Nightly 9:30 P.M. -- Held Over by Popular Demand -- JOHN LEE HOOKER Country Blues Singer, BOB DYLAN...". This would be a two week gig. The "Voice" issue of the week prior, April 6, has the same ad but noting only John Lee Hooker, not Bob Dylan.
A year later on April 16, 1962 Dylan would debut "Blowin' In The Wind" at Gerde's.
A very notable issue as the lives of both Bob Dylan and The Village Voice will forever be entwined in the exciting music culture of Greenwich Village in the 1960's and 1970's.
Complete in 16 pages, tabloid-size, one crease across the center, very nice, clean condition.