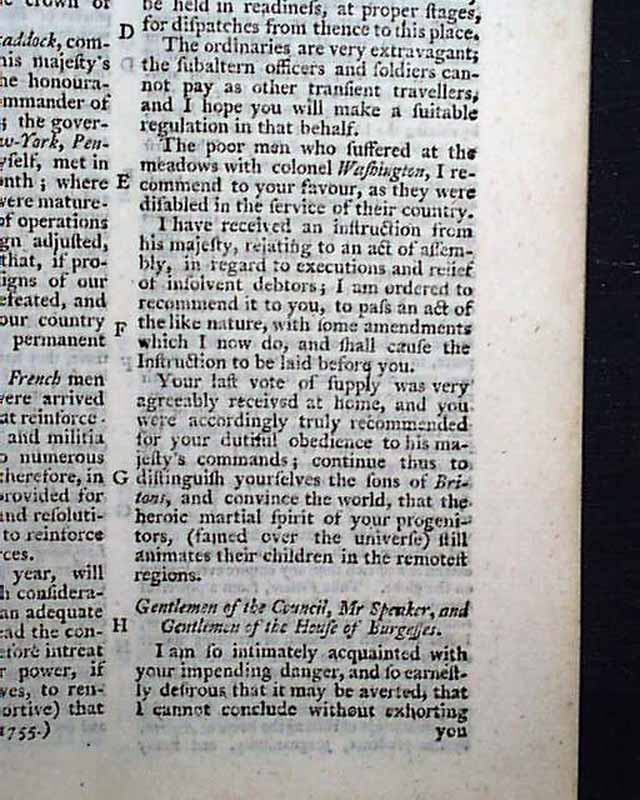 Item # 661574 GENTLEMAN'S MAGAZINE, London, July, 1755  There are no less than two high points in this issue, the first being an article headed: "Gov. Dinwiddie's Speech to the Assembly of Virginia" in which he relates various reports from the French & Indian War, including mention of  "...general Braddock, commander in chief of all his majesty's forces on this continent..." and others. There is also a report reading in part: "The poor men who suffered at the meadows with colonel Washington recommend to your favour as they were disabled in the service of their country...".  This is very early & rather rare mention of George Washington, when he was just 23 years old.
The very first article in this magazine: "Account of the British Settlements in N. America" which is continued from a previous issue & takes over 3 1/2 pgs.
Among other items of interest in this magazine are: "A Message from his Excellency Arthur Dobbs, Esq., Governor of North Carolina, to the General Assembly held at Newburn... [New Bern]" "A Particular Account of the Death of Mr.. Professor Richmann...who was Killed Whilst he was Making an Electrical Experiment" which also includes two illustrations (see); "Journal of Public Transactions in America" an article which begins: "In the instruction given by Somerset County in Virginia to the representatives in the assembly, is the following passage..."; a full back page is a chart of: "Each Day's Price of Stocks in July, 1755" and much more.
The American map called for is lacking.
The complete 48 page issue measuring 5 by 8 1/4 inches, with full title/index page featuring an engraving of St. John's Gate. The issue is in excellent condition.