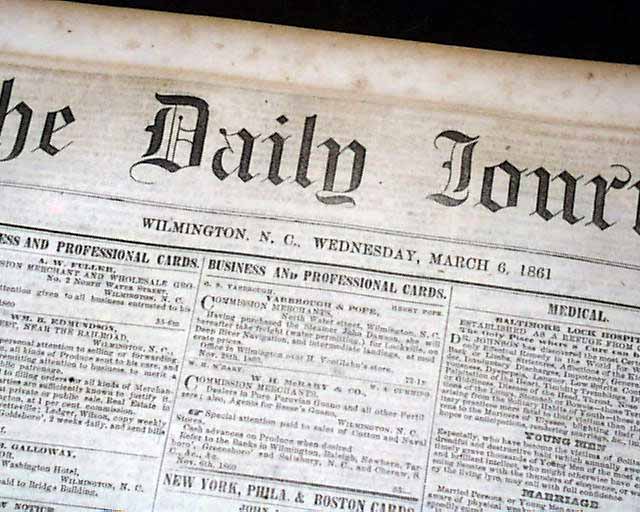 Printed on page 2 in this famous soon-to-be-Confederate port city is Abraham Lincoln's: "Inaugural Address" which takes nearly two full column. In his address he tries to allay the fears of the Southern states as to his motives, and near the end he says: "...I am loth to close. We are not enemies but friends. We must not be enemies. Though passion may be strained, it must not break our bonds of affection...". Perhaps not surprisingly, there is no formal introductory text concerning the festivities, etc, but there is a "jab" in how Lincoln arrived, headed: "The Flight of Mr. Lincoln" noting in part: "...he traveled either in the freight train or in the freight car of Adams & Co.'s Express...the detective police...The probability is that he came as freight in the package car, accompanied by a single companion disguised as a pedlar. Of course, it is only a matter of taste how a gentleman travels, but in view of Mr. Lincoln's position before the country, it looks very much like sacrificing his dignity to senseless timidity." I doubt such a report would be found in a Northern newspaper. There is a brief editorial comment as well: "We publish Mr. Lincoln's Inaugural. It is not exactly Lincolnish all over...It uses honeyed words enough but concedes nothing, & indicates coercion beyond all reasonable doubt...it recognizes no acts of seceding States. It can result in nothing short of war. It is just what it might have been expected to be."
Four pages, very nice condition.