Home > Back to Search Results > Liberty Bell is erected in Philadelphia...
Click image to enlarge 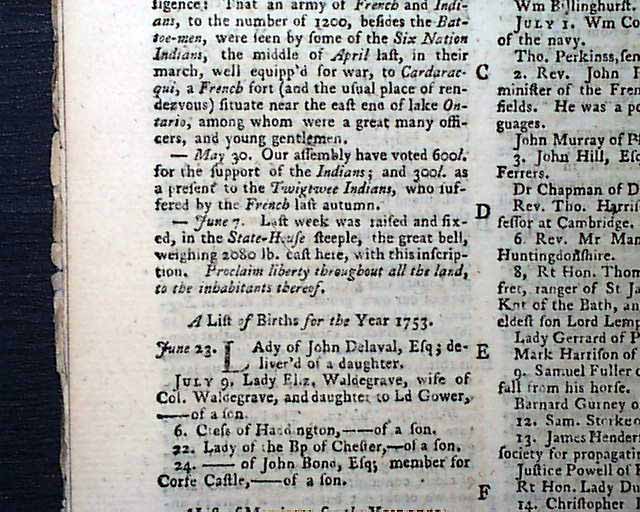 Item # 661456 THE GENTLEMAN'S MAGAZINE, London, July 1753  Near the back of this issue is a terrific--yet inconspicuous--report which is part of various news items under the heading: "America" and dateline of "Philadelphia, May 10 (sub-datelined June 7 - pg.344)" reading: "Last week was raised and fixed, in the State-House Steeple, the great bell, weighing 2080 lb. cast here, with this inscription, 'Proclaim liberty throughout all the land, to the inhabitants thereof'". This is how they reported the installation of which would become known as the Liberty Bell. Terrific item from long before it would become a treasured piece of American history!
Additional news items from America including a report from Charles Town (Charleston), South Carolina telling of the crops that season, and of the troubles with the French Indians who: "...killed some of our people, but after several smart skirmishes, in which one of their chiefs was killed, our militia obliged them to retreat."
Other reports concerning Indians in America as well.
Complete in 44 pages, measures 5 3/4 by 8 1/2 in., and is in very nice condition.