Home > Back to Search Results > Bat Masterson, with a six-shooter on each hip...
Click image to enlarge 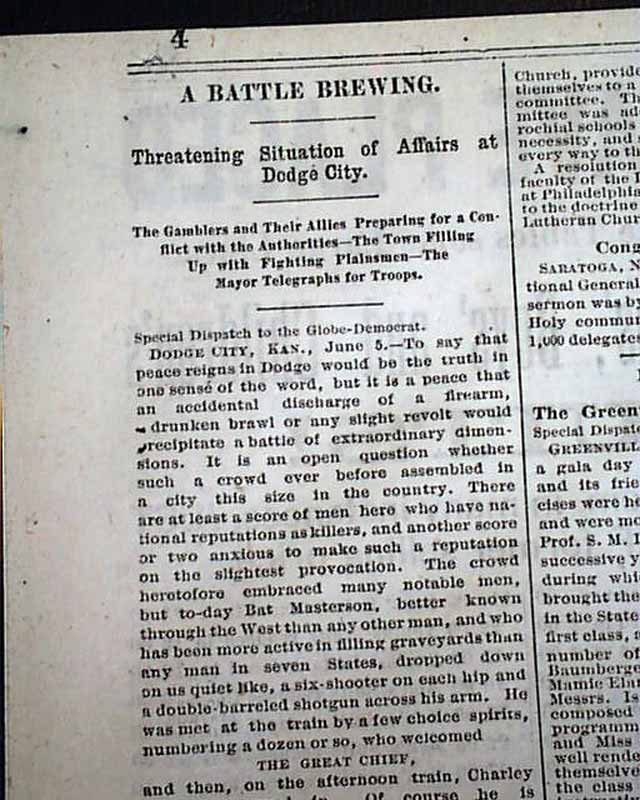 Bat Masterson, with a six-shooter on each hip...

Included within is a rare report on Bat Masterson: "...The crowd heretofore embraced many notable men, but to-day Bat Masterson, better known through the West than any other man, and who has been more active in filling graveyards than any man in seven states, dropped down on us quiet like, a six-shooter on each hip and a double-barreled shotgun across his arm..." with more (see).
The top one-third of the first column on pg. 4 is taken up with a great article on the Dodge City War headed: "A Battle Brewing" "Threatening Situation of Affairs at Dodge City" "The Gamblers and Their Allies Preparing for a Conflict with the Authorities--The Town Filling Up with Fighting Plainsmen--The Mayor Telegraphs for Troops". The article has a "Dodge City" dateline with an iconic Old West account of what is now known as the Dodge City War.
One of the best Old West reports we have offered. And great to have in a St. Louis newspaper.
Twelve pages, very nice, clean condition.