Home > Back to Search Results > Diagram of a new flag for the Confederacy...
Click image to enlarge 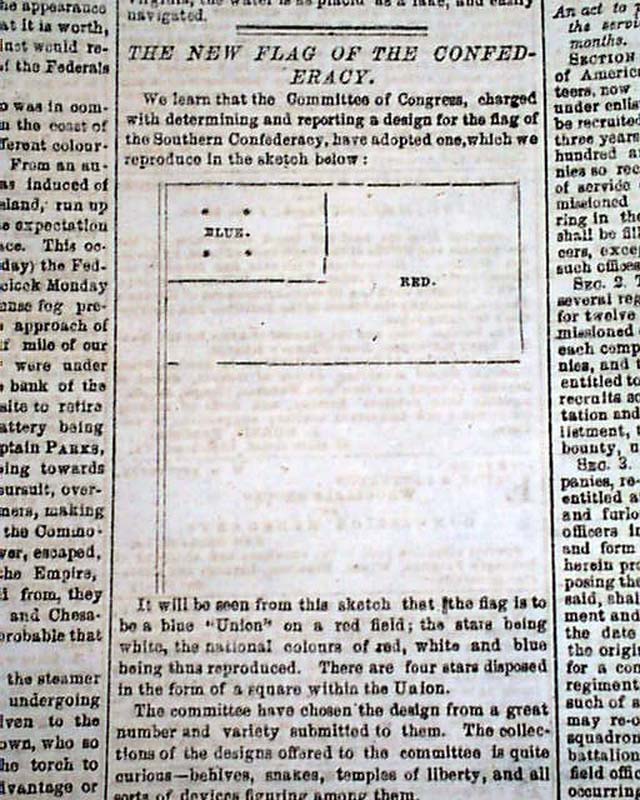 Diagram of a new flag for the Confederacy...

Not only is this a nice Confederate newspaper, but it is from the capital of the Confederacy.
The most interesting content in this issue would be the page two article: "The New Flag of The Confederacy" which includes an illustration of it (unusual to find such in Confederate newspapers) with related text including: "We learn that the committee..charged with determining & reporting a design for the flag of the Southern Confederacy, have adopted one which we reproduce in the sketch below:...the flag is to be a blue 'Union' on a red field, the stars being in white..." with more (see image).
Half of the front page is taken up with ads while half is taken up with Civil War and news reports, with items headed: "Gayeties Of The 'White House' "Mrs. Lincoln's 'Free Summers' " which has some very interesting reading (see for portions). Also: "Important From Mexico" "American Affairs in Europe--Recognition of the Southern Confederacy" and "The Northern Congress--The Treasury Note bill...".
Also on page 2 is: "The Enemy In North Carolina--The Late Fight" "The Roanoke Disaster--Additional Particulars of the Battle Our Forces at Roanoke Island..." "Metal-Protected War Ships" which is an interesting article which comes in advance of the Monitor vs. Merrimac encounter less than a month later. Also: "Whiskey Vs. Bread" "Provision For Recruiting Companies in the Confederate Service" and other items.
Page 3 has both ads & news reports with "Telegraphic News" having various Civil War content.
Complete as a four page newspaper, never bound nor trimmed, and save for a upper corner of the back leaf with a printing error (was folded when printed), and some dirtiness down the vertical fold of the front page, this issue is in uncommonly nice, clean condition.