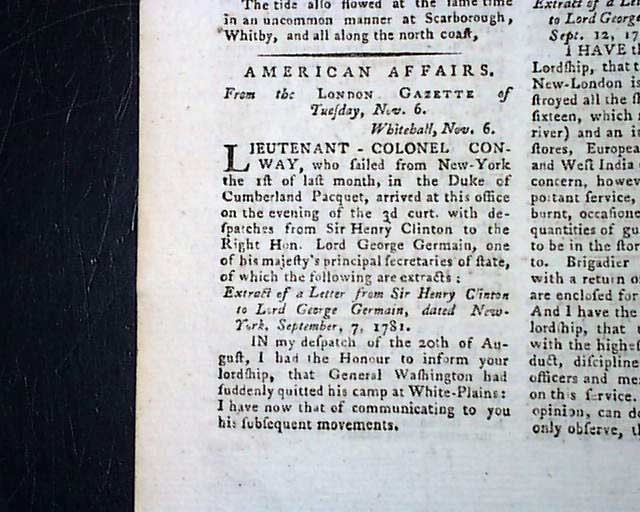 
THE LONDON MAGAZINE, England, November, 1781  Certainly the most notable content is found near the back under the "Postscript", so noted as it contains recently-received news inserted in the issue just before being printed. It is dated November 27.
The report reads in part: "We are extremely sorry to inform our reads...dispatches...dated the 29th of October, informing that on the 19th of the same month Lord Cornwallis, with the troops under his command, forming about 7000 in number and composed of the flower of the British troops in America, found himself under the necessity of capitulating to the French. The particulars of this unhappy affair are reported to be pretty nearly as follows..." and the details follow (see photos).
A very early report, beating their competitor 'Gentleman's Magazine' with confirmation and details as their November issue has far fewer particulars.
Other fine American content as well but it pales in comparison. Near the back is "American Affairs" which begins with two letters from Henry Clinton dated at New York, Sept. 7 and 12, 1781, the latter reporting the attack at New London which mentions the work of Benedict Arnold.
Yet another letter with a report of the naval battle at Yorktown. Also a letter from New London which provides further information on the work of Benedict Arnold there.
Included is the full page plate of: "Lord Thurlow" with a related article. This is the only plate called for.
Complete in 48 pages, 5 by 8 inches, very nice condition.