Home > Back to Search Results > Letter from General Howe on his movements and plans...
Click image to enlarge 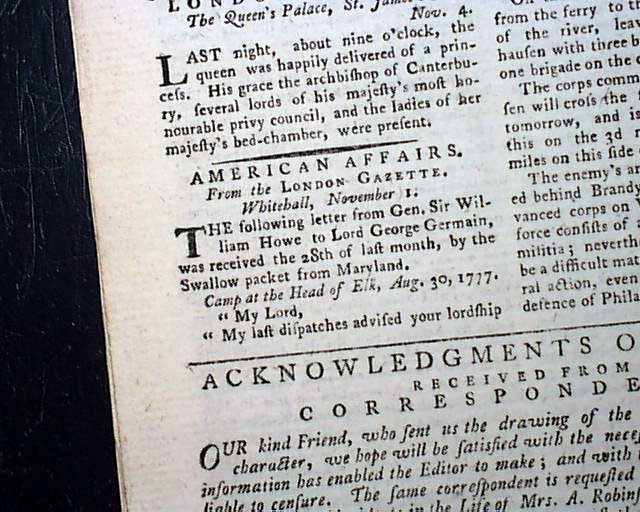 Letter from General Howe on his movements and plans...

Item # 660014 THE LONDON MAGAZINE, England, November, 1777  The back page has some reports headed: "American Affairs" which is a letter from General W. Howe to Lord G. Germaine from his camp at the head of Elk. It includes: "...of the embarkation of the army at Staten Island...arrived off the capes or Delaware...most advisable to proceed to Chesapeak Bay...the fleet arrived at the mouth of Elk river...army landed on the 25th at Elk Ferry, the enemy's army being then in the neighbourhood of Philadelphia...The enemy's army is at this time encamped behind Brandy-wine Creek...it will be a difficult matter to bring them to a general action even though it should be in the defense of Philadelphia."
Lacking the two plates called for.
Complete in 48 pages, 5 by 8 1/4 inches, great condition.

Wealth of interesting commentary from...