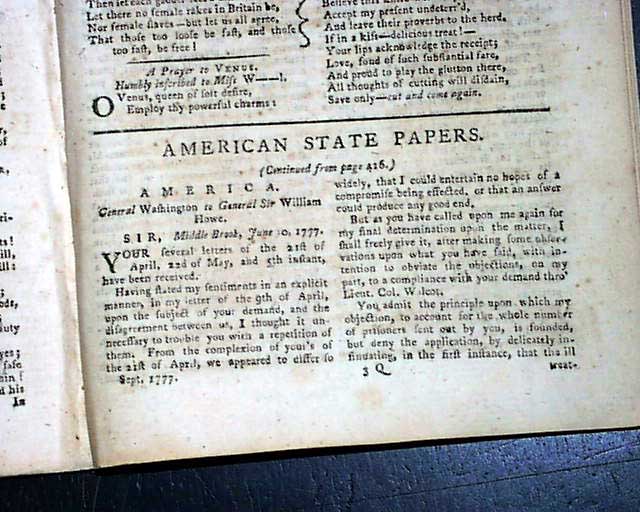 Item # 660012 THE LONDON MAGAZINE, England, Sept., 1777  Headed "America" is a great, nearly 3 page letter of "General Washington to General Sir William Howe" dated at Middle Brook, June 10, 1777. The focus is on prisoners, and their disagreement in their exchange. Signed in type at its conclusion: George Washington. Photos show just portions.
This is followed by a "Letter sent by a Flag of Truce from J. Vernum, Brig. General in the Rebel Army to Col. Losberg, Commanding Officer of the Hessian Troops at Rhode Island..."..
Near the back is a lengthy letter from General Burgoyne to Lord Germaine dated at his headquarters on the Hudson River, July 30, 1777. Very good reading & near the end his notes: "...the enemy is at present in force near Saratoga where they profess an intention of standing a battle, & they have drawn a supply of artillery...for that purpose...", Less than 1 week after the date of this issue would be the Battle of Saratoga which would be a signal victory for the Americans. The letter is signed in type: J. Burgoyne. This is followed by yet another letter with military updates (see).
Both plates called for are lacking.
Complete in 48 pages, 5 by 8 1/4 inches, some margin wear to the first 3 leaves, generally good condition.

The siege and surrender of Charleston...