Home > Back to Search Results > Much tension over the tea issue...
Click image to enlarge 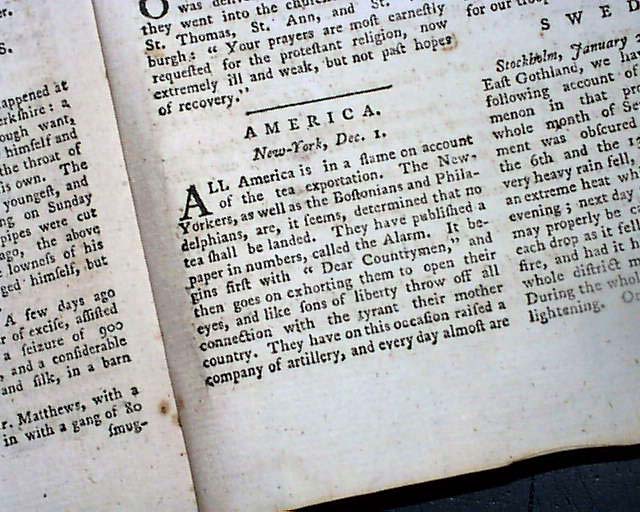 Much tension over the tea issue...


THE LONDON MAGAZINE, England, February, 1774  Near the back is a report headed: "America - New York" which notes in part: "All America is in a flame on account of the tea exportation. The New Yorkers as well as the Bostonians and Philadelphians, are, it seems, determined that  no tea shall be landed..." mentioning a piece published call the "Alarm" which "...exhorts them to open their eyes & like sons of liberty throw off all connection with the tyrant their mother country...They swear  that they will burn every ship that comes in...".
There is then another report from New York which has in part: "All is in confusion about the tea ships..." with more on this.
Keep in mind that the Boston Tea Party was reported in the previous issue.
An interesting feature is the full title/contents page which has a very intricately engraved view of the skyline of London at the time, making this very decorative.
All three plates called for are present.
Complete in 52 pages, 5 1/4 by 8 1/4 inches, very nice condition.