Home > Back to Search Results > What to call the Revolutionary War...
Click image to enlarge 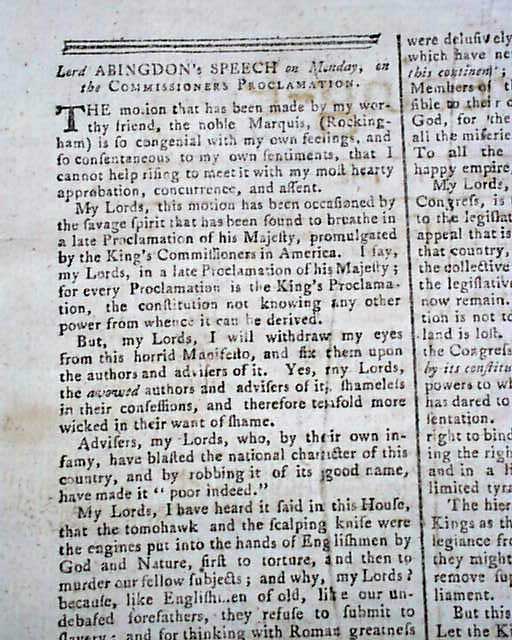 What to call the Revolutionary War...


THE LONDON EVENING POST, England, Dec. 10, 1778  Page 2 begins with: "Lord Abingdon's Speech...to the commissioners' Proclamation" which is critical of the recent Proclamation. Bits include: "...My Lords, this motion has been occasioned by the savage spirit that has been found to breathe in a late Proclamation of his Majesty, promulgated by the King's Commissioners in America...I have heard it said in this House that the tomahawk and the scalping knife were the engines put into the hands of Englishmen by God and nature, first to torture, and then to murder our fellow subjects, and why, my Lords?..." with more.
The back page has reports from London including: "...not content with gaining their blue ribbands as the rewards of their faithful & successful services during this American war, but they are for dying them red in the blood of the Colonies. The present war with America has undergone many changes...in respect to its name. At first it was called a rebellion, then the American war; now that it has turned its coat a third time, it should be called 'A Buccaneering War'..." with more.
Four pages, folio size, never-trimmed margins, red tax stamp on page 3, a bit irregular at the blank spine, good condition.