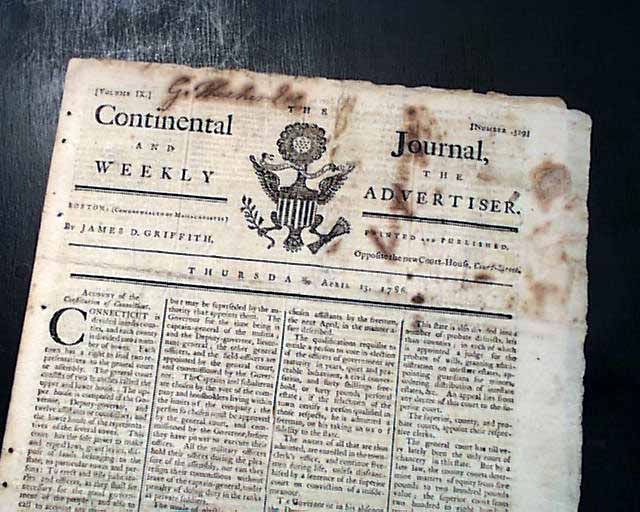 
THE CONTINENTAL JOURNAL & WEEKLY ADVERTISER, Boston, April 13, 1786  Most of the front page is taken up with an: "Account of the Constitution of Connecticut".
Inside has a report from London that: "...have just heard that the negociation between Great Britain and the United States, is in a fair way of being soon brought to a conclusion but few obstacles remaining...".
The back page has a report from New York mentioning the great expense of having he nation's capital at New York, and also noting: "...It is not probable Congress will think of erecting a federal town very soon; perhaps not until a war impends. Many reasons in such case would point out the propriety of erecting one on the western bank of Hudson's river, just above the Highlands..." with other thoughts.
Four pages, a very handsome masthead makes this nice for display. Never-trimmed margins with wide margins, a few small holes at the blank spine, some foxing in the top quadrant, nice condition.