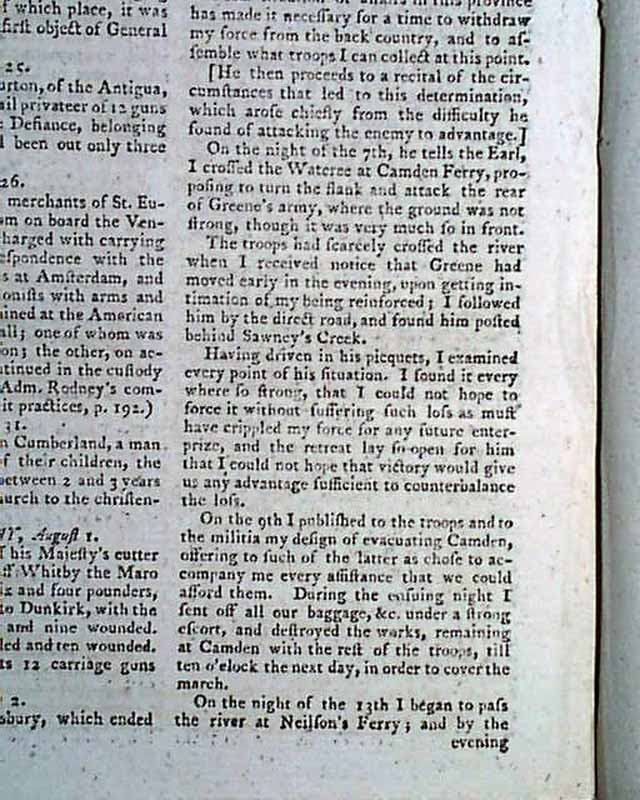 Item # 657750 THE GENTLEMAN'S MAGAZINE, London, August, 1781  The "Historical Chronicle" includes a short bit about: "Two gentlemen...charged with carrying on a treasonable correspondence with the American agent Adams at Amsterdam & with supplying the Colonists with arms & ammunition...". This is followed by a letter from Lord Rawdon to Cornwallis from Monk's Corner beginning: "The situation of affairs in this province has made it necessary for a time to withdraw my force from the back country & to assemble what troops I can collect at this point..." with many particulars of a battle in the Carolinas, including: "...On the 9th I published to the troops & to the militia my design of evacuating Camden..." with more. And this is followed by another letter from Lord Rawdon dated at Charleston, beginning: "In this letter his Lordship acquaints the Ear with the investiture of Ninety-Six by Gen. Greene--with the siege  likewise of Augusta..." with more. And there is yet another letter from Rawdon to Gen. Clinton dated at Charleston (see).
Further on is another report which includes: "...Lt. Cols. Tarleton and Simcoe...had destroyed, the former, 1000 stand of good arms, some cloathing & other stores...The General, in his march from Richmond to Williamsburg, had destroyed 2000 hogsheads of tobacco...That on the 6th of July, Earl Cornwallis having an intention to cross James River, word was brought him of the approach of the enemy..." with more (see images).
There is an interesting article: "Punic Inscriptions in the Western Boundaries of Canada".
Included is the foldout plate called for.
Complete in 52 pages, 5 1/4 by 8 inches with a full title/content page featuring an engraving of St. John's Gate. Very nice condition.