Home > Back to Search Results > The Young Pretender is found and spirited out of Scotland...
Click image to enlarge 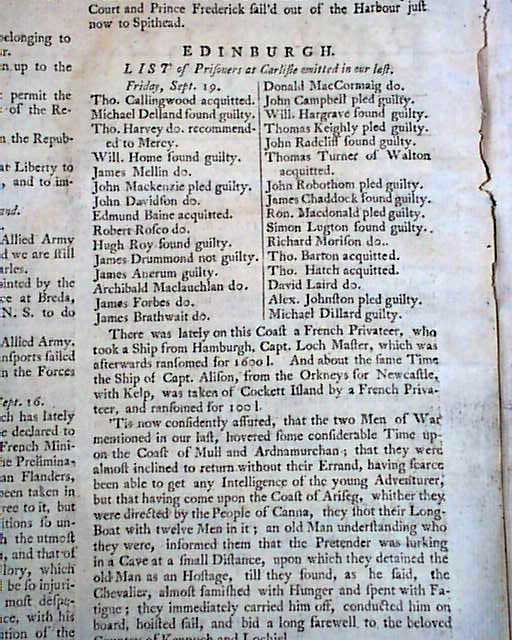 The Young Pretender is found and spirited out of Scotland...


EDINBURGH EVENING COURANT, Scotland, Sept. 25, 1746  Page 2 has a continued: "List of Prisoners at Carlisle Omitted in our last" being those involved in the Jacobite Rebellion.
Then an historic report on the finding of the "Young Pretender" to the throne: "...the two men of war...hovered some considerable time...that they were almost inclined to  return without their errand having scarce been able to get any intelligence of the young Adventurer...an old man...informed them that the Pretender was lurking in a cave ...they found...the Chevalier almost famished with hunger and spent with fatigue; they immediately carried him off, conducted him on board, hoisted sail, and bid a long farewell to the beloved country of Keppoch and Lochiel."
The "Young Pretender" was the Bonnie Prince Charlie, the grandson of King James II who felt he was the rightful heir to the throne of Great Britain, hence the Jacobite Rebellion.
Four pages, front page red tax stamp, 8 by 10 inches, very nice condition.