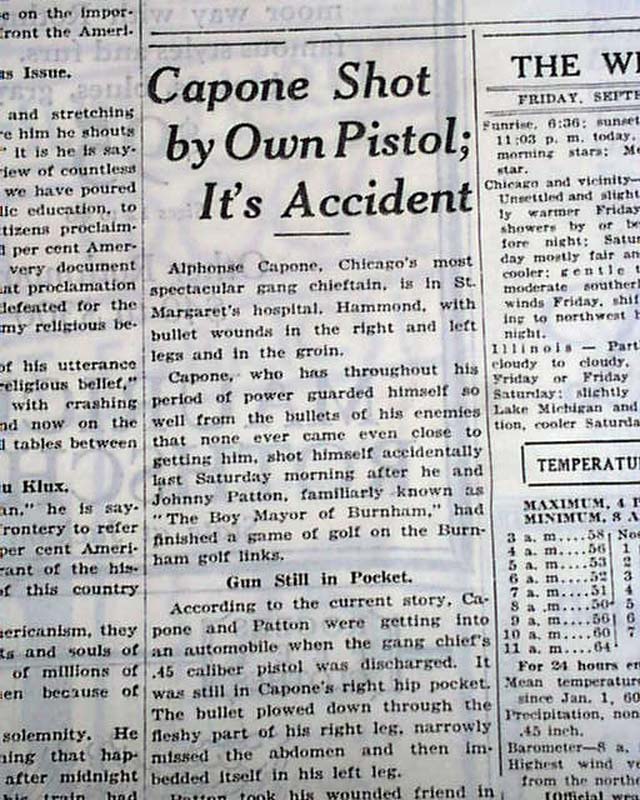 The front page has a great banner headline concerning the gangland wars in Chicago that reads: "'ANNIHILATE MAFIA'--JUDGE" with subheads. (see) Nice for display. But what is most interesting about this issue is a front page report with a one column heading: "Capone Shot by Own Pistol; It's Accident" (see) This event may be something that most gangster collectors wasn't aware of. Might be a report that was only published in a Chicago newspaper.
When it comes to gangsters, organized crime, and the nefarious activities born out of the Prohibition and Great Depression eras, no city is more in the forefront of our minds than Chicago - and what better newspaper can be found than the Chicago Tribune, self-proclaimed to be "The World's Greatest Newspaper" - attributed in part to its dramatic, banner headlines! Whether hanging on your wall or part of an ongoing collection, these events are sure to capture the flavor of this infamous period in American history.
Complete with all 44 pages. This is the "rag edition" printed on very high quality newsprint meant for institutional holdings. In great condition as such.

source: Danny Groner: Twelve bodyguards apparently weren't enough to keep the mobster safe from bullets — his own. In 1928, Capone actually shot himself in both legs and the groin. According to reports at the time, Capone had just finished a round of golf with a friend and was entering the car to head home when his gun discharged accidentally. But more recent reports tell a different story. As Capone rummaged through his bag for a club, a revolver in the bag reportedly fired. Either way, the lesson is clear: When hitting the links, it's probably better to leave the firearms at home.