Home > Back to Search Results > Several reports on Lexington & Concord... Gov. Dunmore on the Gunpowder Incident...
Click image to enlarge 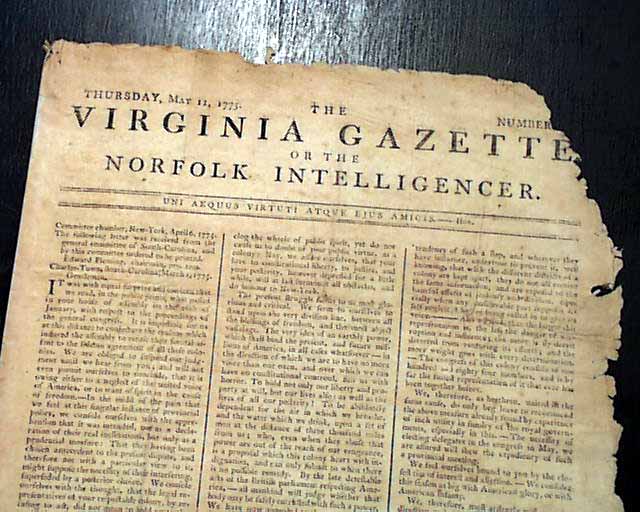 
VIRGINIA GAZETTE OR NORFOLK INTELLIGENCER, May 11, 1775  An exceedingly rare title, the only Revolutionary War era newspaper printed in Norfolk (save for one printed on board the ship 'Dunmore' of which only a single issue is known to exist). Only three American institutions have any issues of this title. It published for just 15 months, from June, 1774 through September, 1775.
Most of the ftpg. is taken up with a great letter from the South Carolina Assembly to the New York Assembly essential chastising them for not agreeing to the resolves of the First Continental Congress, "...owing either to a neglect of the united voice of America, or to want of spirit in the cause of freedom...".
Page 2 has an article reporting rumors of military events of what would prove to be Lexington & Concord: "...in great suspence about our accounts from Boston...we make not the least doubt there has been a smart engagement between the King's troops and the provincials in which we hear the former has lost 302 men killed wounded, & taken prisoners; and the latter 37..." with a bit more.
Another article has a letter from Boston noting in part: "We have been closely besieged and no provisions brought to market for several days...Lt. Knight as the only officer killed in the engagement; 14 officers wounded...62 privates killed & missing and 105 wounded..." and a bit more on the casualties from Lexington and Concord.
And this is followed by yet another letter from Boston with further details of Lexington & Concord including: "...who left Boston in the evening of the 19th ult. (the day of the engagement) we learn that the first stand made by the country was with only 200 men at Concord bridge, which the soldiers were endeavouring to pull up. The solders gave the first fire and killed 3 or 4. It was returned with vigour by the country, & the regulars began soon to retire. The country people immediately lined the roads which are secured with stone walls & their numbers hourly increasing, the annoyed the regulars exceedingly...A considerable body of the provincials had formed an ambuscade near Cambridge for the troops in their return..." with more detail.
And then yet another account with nice detail on the Battle of Lexington and Concord (see photos).
Still on page 2 is an address from Virginia Governor Dunmore beginning: "Commotions & insurrections have suddenly been excited among the people which threaten the very existence of his Majesty's government...and no other cause is assigned for such dangerous measures than that the gunpowder which had, some time past, been brought from on board one of the King's ships...and was deposited in the magazine of this city, hath been removed, which, it is known, was done by my order..." & much more on the historic Gunpowder Incident. Given that this event was local (happened in nearby Williamsburg) it received little attention outside of Virginia. Great to have in this newspaper.
Page 3 has almost a full column report concerning the Second Virginia Convention (where Patrick Henry made his famous quote 'Give me liberty or give me death'). A few words are affected by margin loss to the back leaf (see).
Four pages, never-trimmed margins, some margin loss at the upper right causes minor word loss to pages 2, 3 & 4 but fortunately no loss to the Lexington & Concord items.