Home > Back to Search Results > Strength of Washington's army...
Click image to enlarge 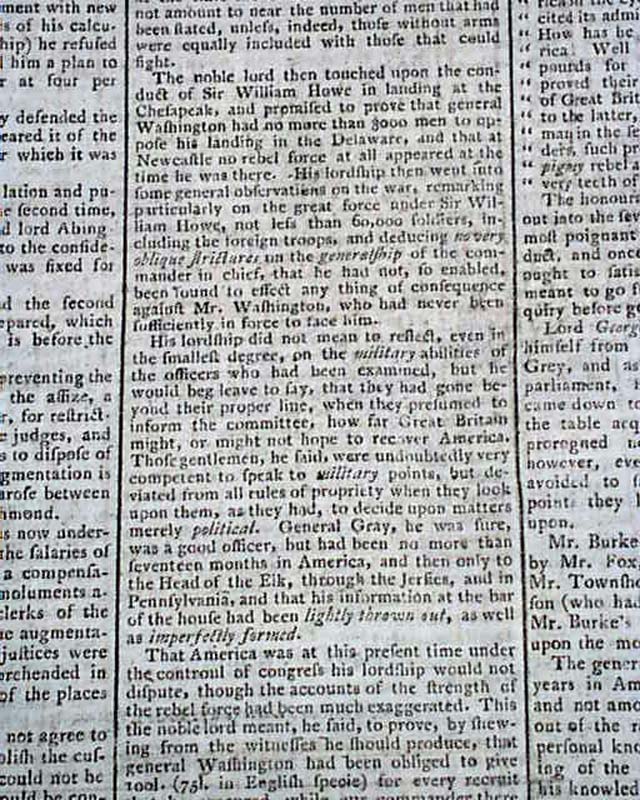 Page 2 has some good content relating to the Revolutionary War including much from the "House of Commons" on the examination of Sir William Howe and his actions in America. One item begins: "...then touched upon the conduct of Sir William Howe in landing at the Chesapeak & promised to prove that general Washington had no more than 3000 men to oppose his landing in the Delaware...That America was at this present time under the control of congress his lordship would not dispute, though the accounts of the strength of the rebel force had been much exaggerated..." and much more. Some fine reading.
Another pg. 2 item has: "Letters from New York...say the Shawanese Indians have taken a fort from the rebel upon one of the branches of the Ohio..."and further on: "...In April Mr. Washington's army considerably under 10,000 men & in the southern provinces not any attempt made to recruit his numbers...The astonishing success of the New York privateers had almost induced Congress to lay a general embargo on all exportation..." and more.
Four pages, a bit close-trimmed at the bottom of the ftpg. with a minor bit of corner lacking, otherwise nice.