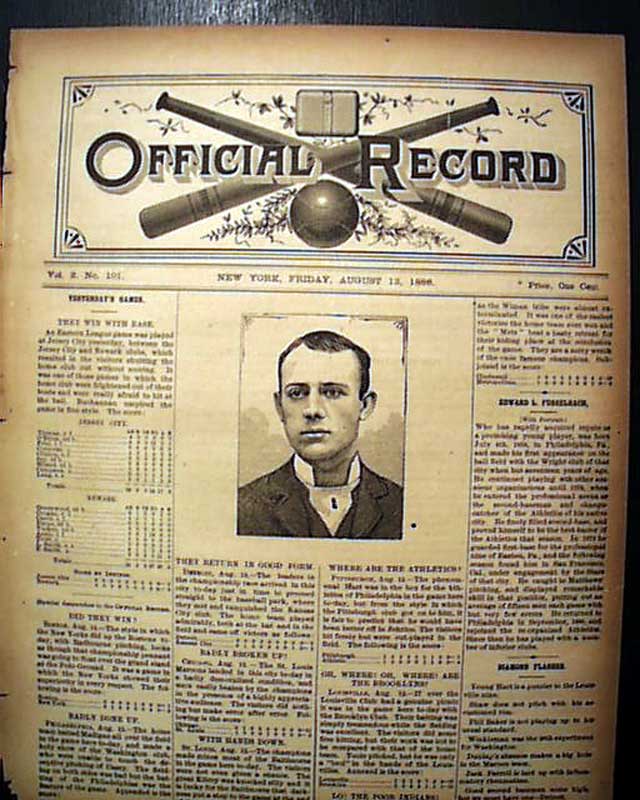 This is a volume two issue of a very rare & historically important baseball newspaper, the very first daily sports newspaper dedicated entirely to the national game of professional baseball.
Although the masthead reads: "Official Record" the title at the top of pages 2, 3 & 4 reads: "Official Baseball Record". This issue has a terrific baseball-themed masthead, featuring two crossed bats (barrel handles with 3 painted stripes), a baseball, and a canvas base (see).
This issue is replete with baseball news. The front page features an engraving of "Edward L. Fusselbach" with a front page biographical sketch on him. The ftpg. also has reports of: "Yesterday's Games" which includes 7 games. Also some tidbits on baseball under: "Diamond Flashes".
Page 2 has "Chasing Flies" "Sparks From The Diamond" "Our Tips" "Diamond Waftings" all containing various baseball news tidbits. And there are the standings of six various leagues.
Pages 3 & 4 have a wealth of ads including: "Baseball At The Polo Grounds" noting the dates of 12 future games.
The rarity of this issue cannot be overemphasized. It is suspected this newspaper lasted for less than 15 months, the very first issue dated July 15, 1885 & the final issue dated Oct.  9, 1886. The first volume saw just 63 issues published, and the second had 150 editions for a total of just 213 issues ever published.
While the first volume was printed on rather high-quality "rag" paper allowing for better preservation, the second volume (1886) was printed on more acidic newsprint resulting in exceedingly few issue remaining to this day as the paper turned brown & fragile rather quickly.
This issue is complete in 4 pages, evenly toned & browned at the margins, slightly irregular at the spine & partially loose at the spine, generally in good condition. Must be handled carefully due to its fragility.
This issue comes in a protective, acid-free folder for safe keeping. A rare opportunity for any serious baseball collector.