Home > Back to Search Results > Complaining about taxation without representation... War with the Regulators is over?
Click image to enlarge 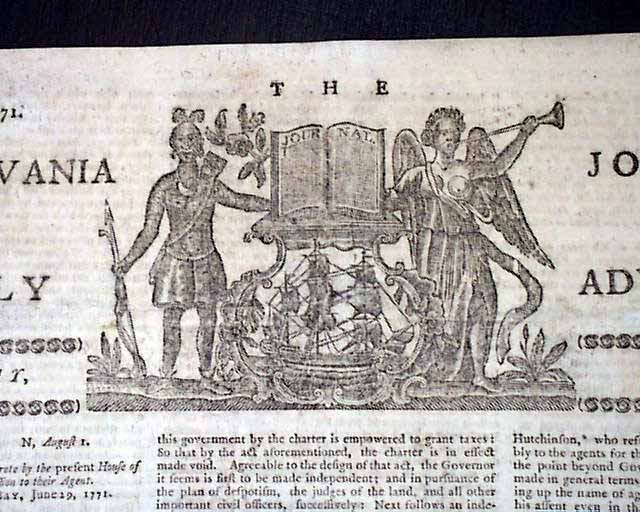 Complaining about taxation without representation... War with the Regulators is over?

* re. Taxation without representation
* War of the Regulation ends

This newspaper features one of the larger & more decorative masthead engravings to be found in a colonial America newspaper.
Most of the ftpg. is taken up with a letter from the Mass. House of Representatives to their British agent concerning taxation. Near the beginning is: "We cannot think the doctrine of the right of Parliament to tax us is given up while an act remains in force for that purpose, and is daily put in execution; and the longer it remains, the more danger there is of the people's becoming so accustomed to arbitrary  & unconstitutional taxes, as to pay them without discontent; and then, as you justly observe, no Minster will ever think of taking them off but will rather be encouraged to add others...". A great letter on an issue which would lead to the Revolutionary War.
Page 3 has a report from New Bern, North Carolina, noting a presumed end to the War of Regulation: "...just been through the settlements of the Regulators, we have advice that upwards of 6000 of those people have taken the oaths of allegiance to his Majesty & happily returned to their farms & plantations. They say they are  now perfectly contented...letters form the Regulating Chiefs, it has very plainly  appeared that they intended to seize the government..." with more.
The Regulators were a large group of North Carolina colonists who opposed the taxation and fee system imposed by colonial officials in the late 1760s. This political argument led to a battle between the colonial militia and the Regulators in 1771.
Four pages, a bit irregular at the blank spine margin, nice condition.