Home > Back to Search Results > The King is angry at the colonies for encouraging opposition...
Click image to enlarge 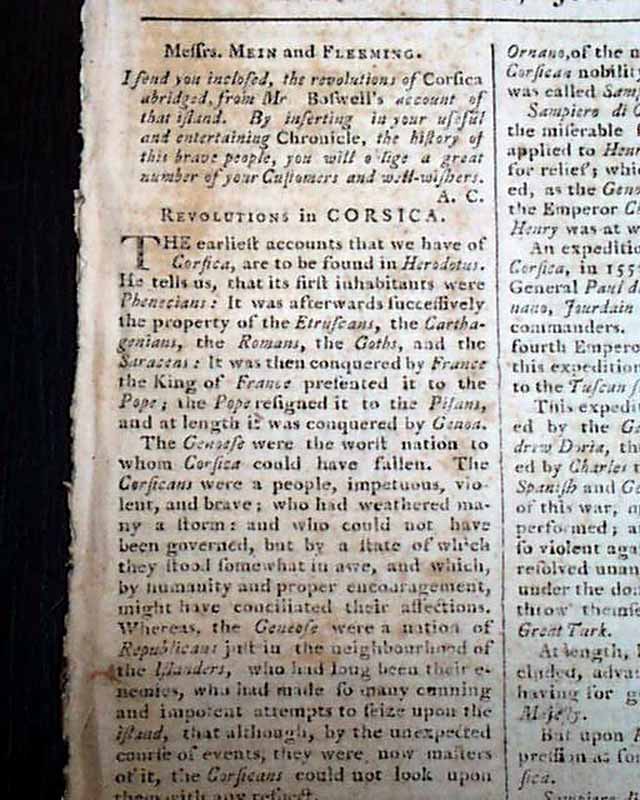 The King is angry at the colonies for encouraging opposition...


THE BOSTON CHRONICLE, July 18, 1768  All of pages 1, 2 & 3 are taken up with a detailed report of the island of Corsica, the latter page including a biography of Pascal Paoli which carries over to take close to half of pg. 4.
Near the back under "America" are reports from Charleston and Annapolis, as well as "A Message from the Governor" of Maryland which includes: "The King, our most gracious sovereign, having been informed that a circular letter...was in February last sent by the Speaker of the House of Rep. of the colony of Massachusetts...hath been pleased to order it to be signified to me that he considers such measures to be of a most dangerous & factious tendency, calculated to inflame the minds of his good subjects in the colonies, to promote an unwarrantable combination, to excite & encourage an open opposition to & denial of the authority of parliament, & to subvert the true principles of the constitution..." with more. This is followed by the response of the Maryland Assembly to the governor which is great reading as well (see).
Eight pages, 8 1/2 by 10 1/4 inches, period notations in a front page margin, very nice condition.