Home > Complaints from the colonists.... Speculating about war...
Click image to enlarge 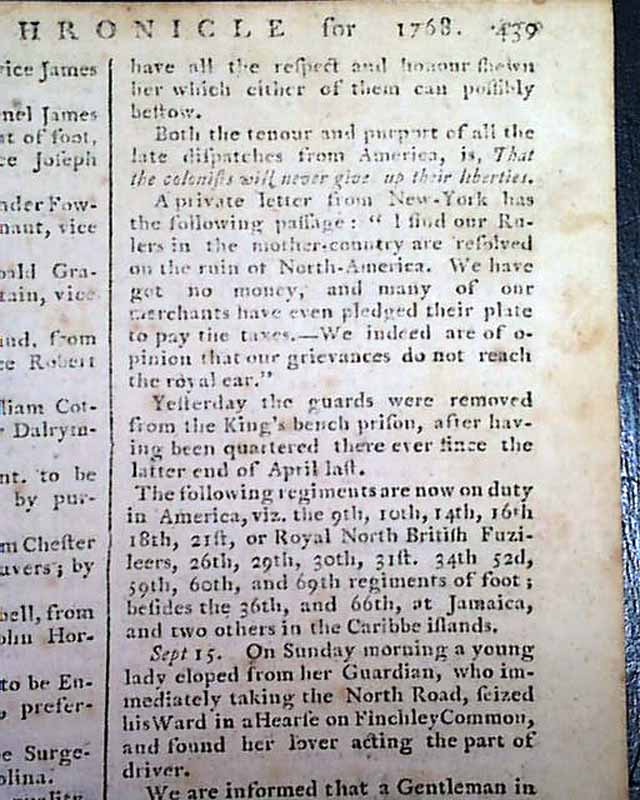 Complaints from the colonists.... Speculating about war...

This is not a "supplement" issue which would have accompanied the regular weekly issue, but rather a separate publication with its own date from mid-week. The four page issue is almost entirely up with reports from Europe with a few page 3 item from London concerning America including some prophetic comments: "...total number of the militia in the large province of New-England is upwards of 150,000 men who all have and can use arms...it was reported that the people of Boston had taken Governor Bernard prisoner...People in general seem much dissatisfied with the behaviour of the Bostonians. How these things will end time only will determine: many people think it will not terminate without bloodshed, but I hope they will be mistaken." (see) On the same page is: "...letter form New  York has the following passage: 'I find our Rulers in the mother country are resolved on the ruin of North America. We have got no money & many of our merchants have even pledged their plate to pay the taxes. We indeed are of opinion that our grievances do not reach the royal ear."
A nice colonial Boston imprint from before the Revolutionary War. Measures 8 1/2 by 10 1/2 inches, very nice condition.