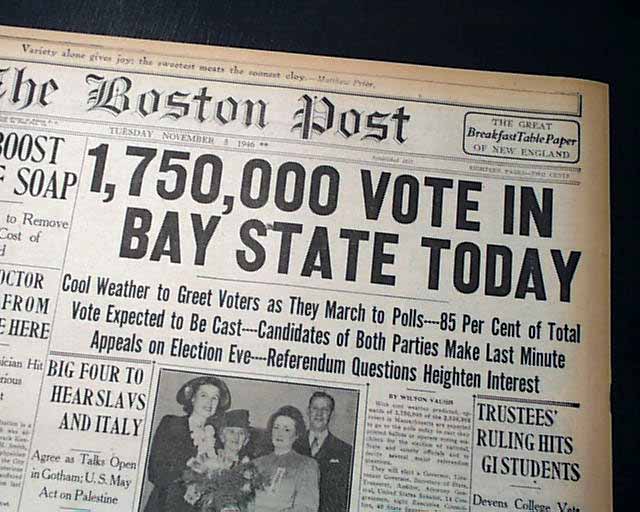 A brief, inconspicuous report on page 6 of this election day issue marks the beginning of the Kennedy political dynasty which would last for 63 years. When Patrick Kennedy left his congressional post in December, 2010 it marked the first time in 63 years there wasn't a Kennedy serving in elected office in Washington.
The dynasty began in November, 1946 when John F. Kennedy would a Congressional seat. This report actually makes the prediction of his win as the results would not be known until the next day, with: "...Mayor Curley's 11th district seat in Congress will be filled by Democratic John F. Kennedy who was assured of election in winning the June primary. He is being opposed on the ballot by Lester Bowen...& Philip Geer...neither of whom has a chance." (see photos) He would go on to win this seat two more times before being elected to the Senate in 1952.
A very significant political issue and a report likely only to be found in a Boston vicinity newspaper. Complete in 18 pages, nice condition.