Home > Back to Search Results > War of 1812 shipping embargo....
Click image to enlarge 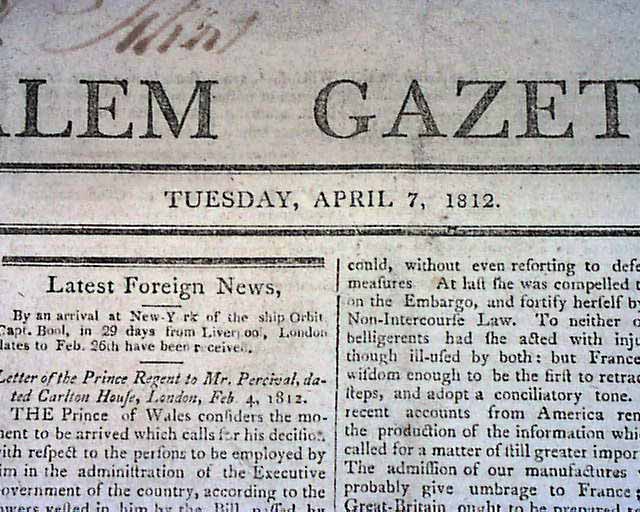 SALEM GAZETTE, Massachusetts, April 7, 1812  Page 3 has an atypically large head: "Another EMBARGO" and a brief report confirming the imposition of another embargo. Says the message reached Boston in 76 hours from Washington. Originally a 60-day embargo that was proposed by President Madison, it was changed to a 90-day embargo by moderate members of Congress who believed a peaceful settlement with Great Britain was still possible.
The embargo was especially unpopular in New England (and in some Southern states) where shipping was an important industry. In addition to opposing the commercial restrictions created by the embargo, the New England states also opposed war with Great Britain, eventually referring to the war as Mr. Madison's War.
Quite unusual to see a heading this size during this period. Four pages, some margin dirtiness, staining at the edges. Untrimmed in good condition otherwise.